SV Sanitas has arrived at our final country for this cruising season! We’ve been exploring for the past two weeks as we slowly cruise east along the island toward our goal of Fajardo for hurricane season. Our first stop was La Parguera, or as I like to call it – the Jersey Shore of Puerto Rico. We arrived on a Friday afternoon, just as things were getting hopping, and we dinghied in with SV Sava to check out the town. The waterfront is lined with colorful wooden house boats that make me want to move to La Parguera. Jose, from the Puerto Real marina, had given us a tip that we could tie up to “Frank’s” dinghy dock (just ignore the Privado signs) so we quietly did so.

La Parguera was a bit of culture shock after a month in the Dominican Republic. CocaCola and Medalla beer signs everywhere, a pervasive smell of fried food, and everyone dressed for fun – in tight clothing and lots of bling. We made a lap of the entire town in about ten minutes, and then gave up our search for culture or history, and just joined the party.

We sat at picnic tables outside a restaurant filled with local families. However, the smell of old fryer grease was a bit overwhelming. I excused myself for a moment, just to check out the menu at Moons Tapas Bar a couple of block up the hill. Oh yeah! Now this is where we need to eat! Apparently, the rest of our group agreed, because soon we left the grease haze below us, settled in on a breezy patio, and tasted six different flavors of homemade sangria before deciding on a pitcher of Arancino flavor. The food here was the best I’ve had since Florida – grouper ceviche, chimichurri skirt steak, lobster tacos wrapped in taro root tortillas…. nom,nom,nom!

Capt. Mike was obsessed with this old fashioned, hand-carved horse racing game called Pica. Because it was all in Spanish, we didn’t really understand how the betting worked, or even how to tell which horse had won – the track was a circle, and there was no obvious finish line. But everyone who threw down a dollar was so enthusiastic, and everyone was cheering, jumping, and shouting, so the game was impossible to resist. After watching a long time, Capt. Mike thought he had it figured out, and threw $1 down on his lucky number 3. The carny slapped a double 3’s domino down to keep it from blowing away – more lucky threes! We crossed our fingers, and held our breath, and cheered and encouraged….. and horse #3 won! Mike’s $1 bet nabbed him $20 and the most excited face I’ve seen in a very long time! We went right back to El Karacol for another one of those delicious mojitos! 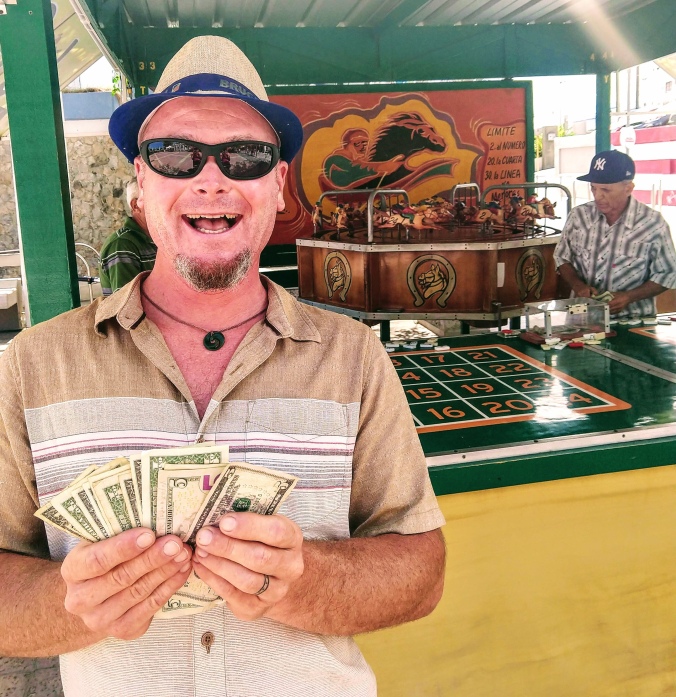 After our big night on the town, we kept it quiet on Saturday. Explored the mangrove rivers by dinghy, hoping to spot an elusive monkey, but no luck. We snorkeled a bit too, but there were only a few small fish hiding in the mangrove roots. By early afternoon, we raised anchor to move the big boats east to an anchorage closer to the Bioluminescent Bay. However, when we rounded the corner and caught sight of Cayo Caracoles, Capt. Mike shouted, “We are missing out on one heck of a party!” I poked my head up into the cockpit and saw that he was absolutely right. At least 50 powerboats were moored and anchored in the shallow waters just off the Cayo, some with flags flying, loud salsa music blaring, all with a drift of floating partiers hanging out in the pool formed by the circle of boats. Well what’s the point of being a cruiser on no particular schedule if you can’t change your plans? So we threw an anchor down right there, piled in our dinghies along with Sava, and floated over to join in the fun. We enjoyed meeting local Puerto Rican boaters, including two who keep their boats in the Puerto del Rey marina where we’ll be storing Sanitas. We also had the chance to talk a bit with folks who had lived through hurricane Maria in 2017 to learn firsthand what life in Puerto Rico had been like without water or electricity for months after the storm, and how many villages are still struggling today. 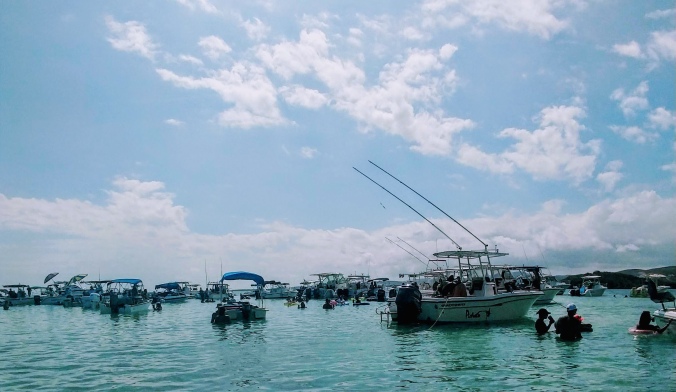 On Sunday, as the weekend was winding down in this party town, Sava continued sailing eastward but Capt. Mike and I stayed put. We had one item left on our La Parguera bucket list – visiting the bioluminescent bay. There are several bays around the world where the conditions are just right to grow a high concentration of microscopic dinoflagellates and therefore, for the salt water to glow at night when agitated. Puerto Rico is lucky enough to have three of these magical bays. We were excited to visit the one near La Parguera, because you are allowed to swim there. So we moved the big boat again, for the third time in three days, close to the mouth of the bay. That turned into more of an adventure than expected. We’d followed a tip on Active Captain (sort of the Yelp reviews of the sailing world) recommending a safe anchorage that did not appear on any of our charts. We discovered the risk of believing “some guy” over believing the charts, because when we approached the coordinates he’d provided, we suddenly found ourselves in super shallow water. So Capt. Mike slammed it into reverse, and we circled looking for a deeper anchorage. I dropped the anchor in a small sandy patch, but the anchor rode immediately fouled on a craig of Rock that surrounded it. Poor Mike had to dive to free the chain and it was almost sunset before we found a safer anchorage nearby.

It was worth it though! On a Sunday evening, there were only about three other small boats in the bay after sunset and before moonrise. We anchored the dinghy and took turns jumping in. Mike made “snow angels” in the water, trails of phosphorescence following his arms and legs. I pretended I was Mickey Mouse in Fantasia, shooting streams of sparkles out of both hands like a wizard. And then spinning around in circles, gazing through my snorkel mask, feeling as though I was inside a snow globe. Sorry that there are no photos of this magical phenomenon, but the bioluminescence doesn’t show up in pictures or video. If you see it in advertisements, it’s been photoshopped! (Now you know) So if you want to experience this amazing natural wonder, you’ll have to add a visit to Puerto Rico to your bucket list, and come see it yourself!