After our tour of the Frigate Bird Sanctuary, our guide George Jeffreys steered his Boston Whaler north in the lagoon to a spot near the ruins of the old Lighthouse Hotel. Capt. Mike and I kind of looked at each other, like “Where’s he going? I thought he was taking us back to our boat” But George found some magical unmarked spot and lo and behold! Raised up a big lobster trap and dumped it in the boat. Silly me wondered whether there would be a lobster in the trap. Well, there were at least a dozen! George used a stick to pull out all of the lobster that were over the legal size for fishing – seven in all. For $15 we had the makings of a wonderful dinner!

At least we WOULD have a good dinner if we could herd those grumpy lobsters onto our boat, and could figure out how best to clean them and cook them. So Capt. Mike is in charge of sailing, and I guess I’m in charge of killing lobster. I googled “how to clean a Caribbean lobster without tools”, and it goes something like this…. First, put on a pair of work gloves to protect your hands from the spiny bits. Then grab the body of a lobster in one hand, and it’s tail in the other and pull and twist. Drop the body overboard quickly, so you don’t have to watch it twitch or confront the reproach in its beedy little eyes. Save one of the long tentacles because you’ll use it to pull the digestive tract (aka the poop chute) out of each tail. Then rinse well with seawater.

I trimmed the soft inner shell off each tail, topped with melted butter, garlic, and Old Bay spice, and roasted in the oven for 15 min. With a side of mashed sweet potatoes, and a fresh tomato salad concocted by Melinda on SV Sava, we had an amazing lobster dinner while watching the sunset.

Have you heard of the Caribbean island of Barbuda? If you have, do you only know it as “That island where every single resident was evacuated after hurricanes Irma and Maria”? If so, you might wonder if there’s anything left to visit. I’m here to tell you enthusiastically – YES! This special and beautiful island with its courageous residents is open for business and well worth a visit! 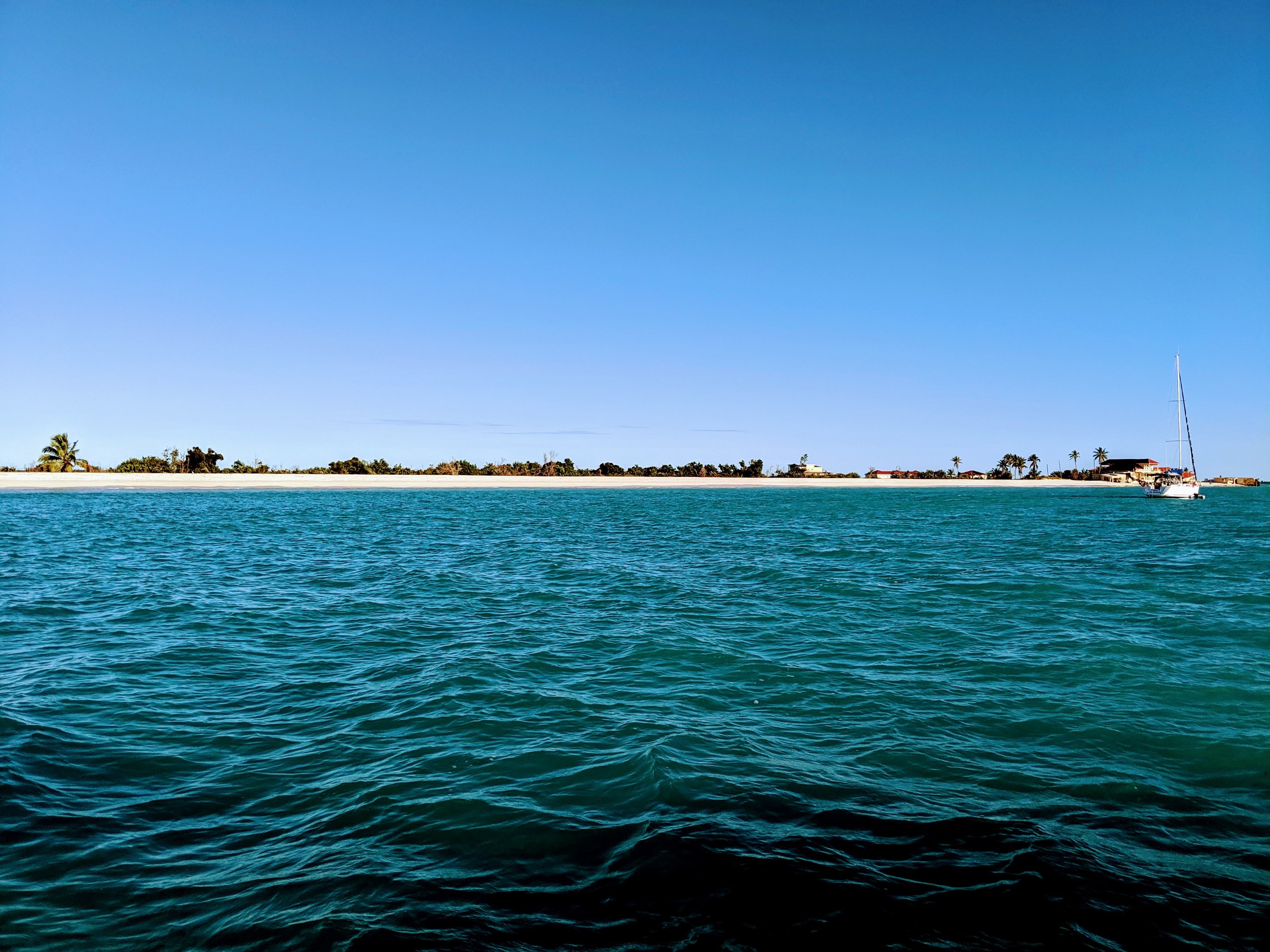 We departed St Barthelemy at 4am and arrived at Low Bay, Barbuda about 12 hours later, anchored in gorgeous turquoise water, just off an empty white sand beach. We raised the yellow quarantine flag, had dinner, and went early to bed. The next morning, we lowered our dinghy, Bug, into the water and headed to town to clear into the country. Barbuda is part of the country “Antigua and Barbuda” and it has a teeny tiny customs and immigration office in the only town on the island, Codrington Village. We sent an email 48-hours in advance, requesting permission to clear into the country here, and received permission just before we left St Barts. We had to ask several times for directions to customs as we wandered through the sleepy town with no street signs and little commercial development. When we found it, the customs agent said “Clearing IN? Really?” And then the immigration officer showed up and she said “Clearing IN? Really?” Apparently this doesn’t happen very often!

The highlight of our trip was a visit to the largest Frigate Bird colony in the Western Hemisphere, and home to approximately 5000 magnificent frigate birds. 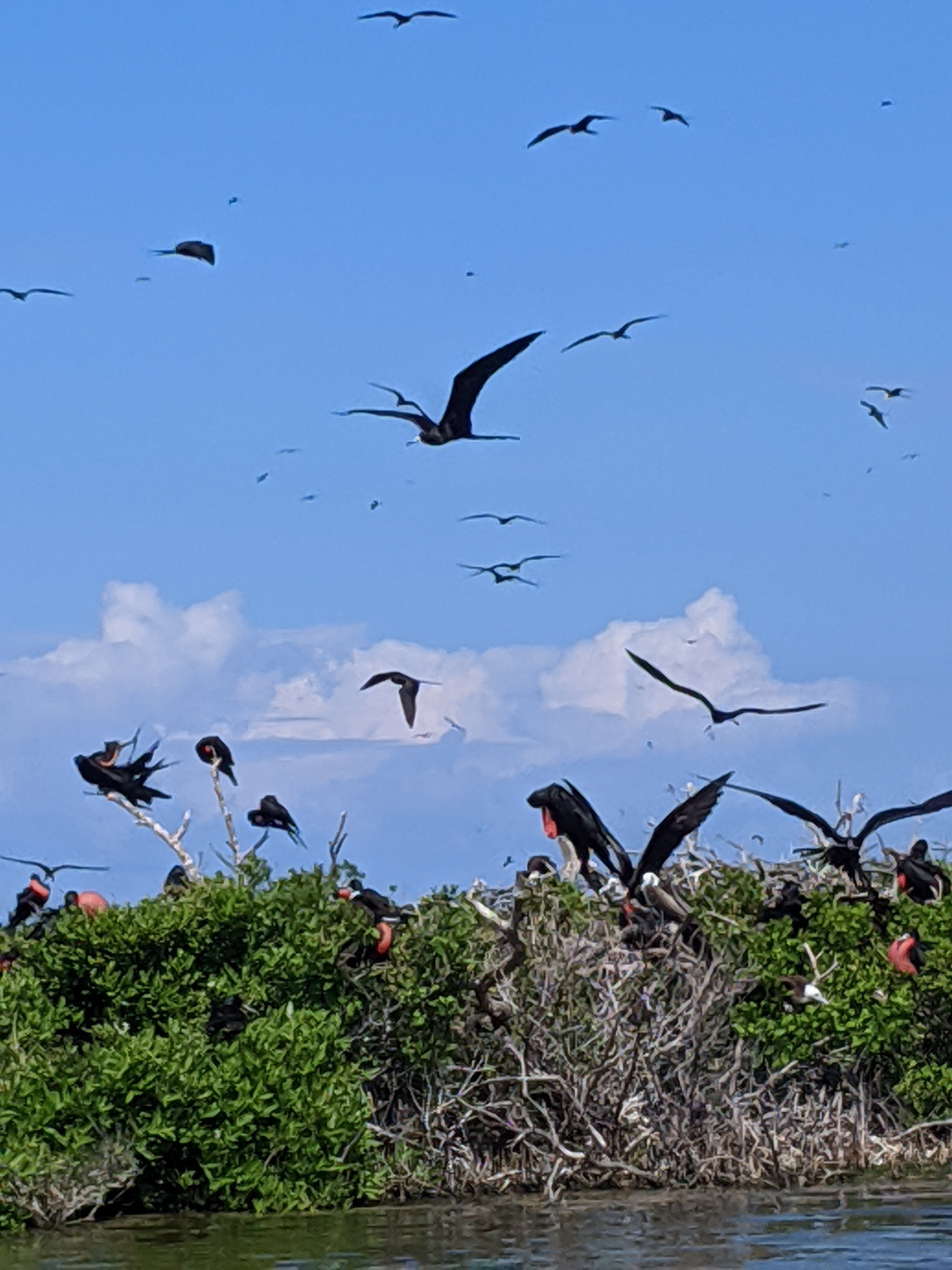 Our guide, George Jeffreys, has lived in Barbuda his entire life, and has raised eight kids here, who now live all over the Caribbean and New York City. George told us a lot about the history and culture of Barbuda on the boat ride to the bird sanctuary. He told us that Barbudans are the biggest, strongest… and best looking people in the Caribbean. And from the folks I met on our visit – I believe him 😃 He told us what it was like to grow up on this quiet, remote island. As a teenager, he and his friends would swim across the Codrington Lagoon from town to the barrier island, walk a mile or so along the beach, and swim back – each returning with a bag full of lobsters from the adventure. Now to put this feat in perspective, it took Capt. Mike and I over half an hour to cross that lagoon one way in our dinghy, with a 5hp motor! 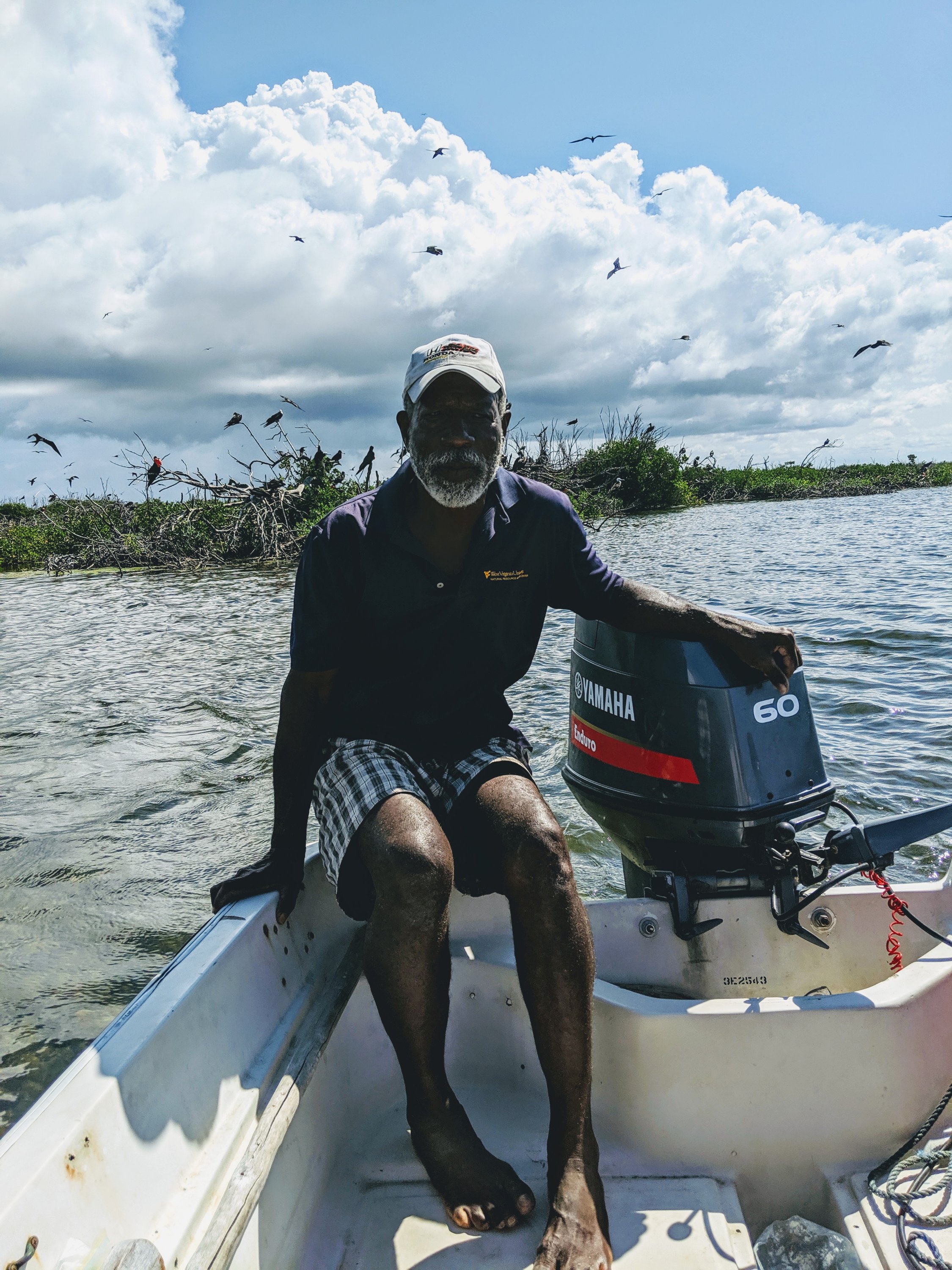 Frigate birds (or Man-o-Wars) can live 30 to 40 years, and grow to have a wingspan of up to 8 feet. They can fly over 20 mph. That’s four times faster than Sanitas’ average speed! They don’t seem to mind at all that a boat full of tourists drifts close by in a small boat to stare at them. The males are large and glossy black, and during mating season, they inflate a huge red neck pouch to attract the attention of the females. The yearlings are almost as big as the adults, but white and fluffy. And the chicks! Each mother lays a single egg, and nurtures her teeny fluffy white chick, with help from her mate finding fish to feed them both. George didn’t rush us, but gave us plenty of time to ooh and aah and take photos. And then we just put the cameras down and watched and enjoyed. 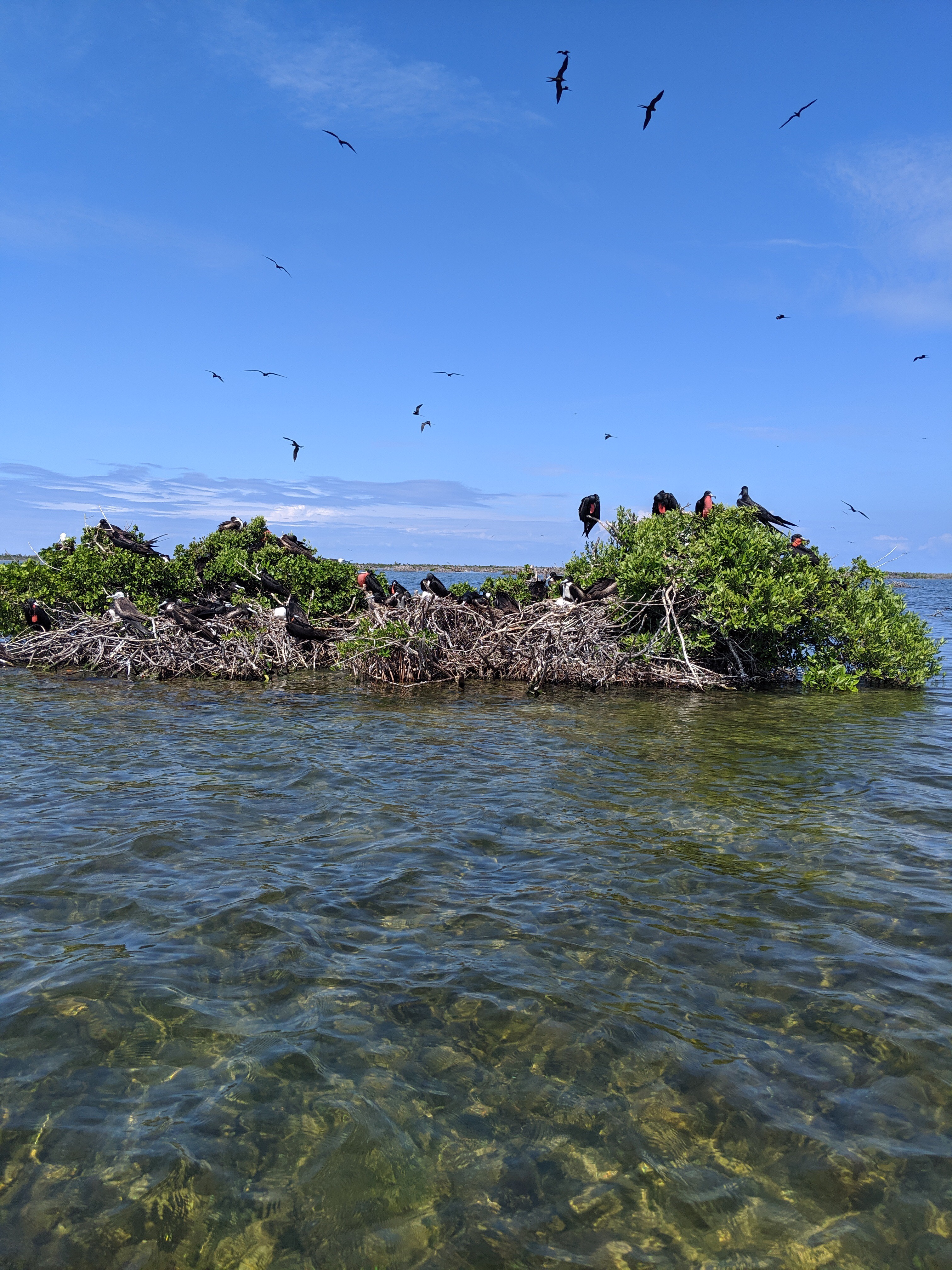 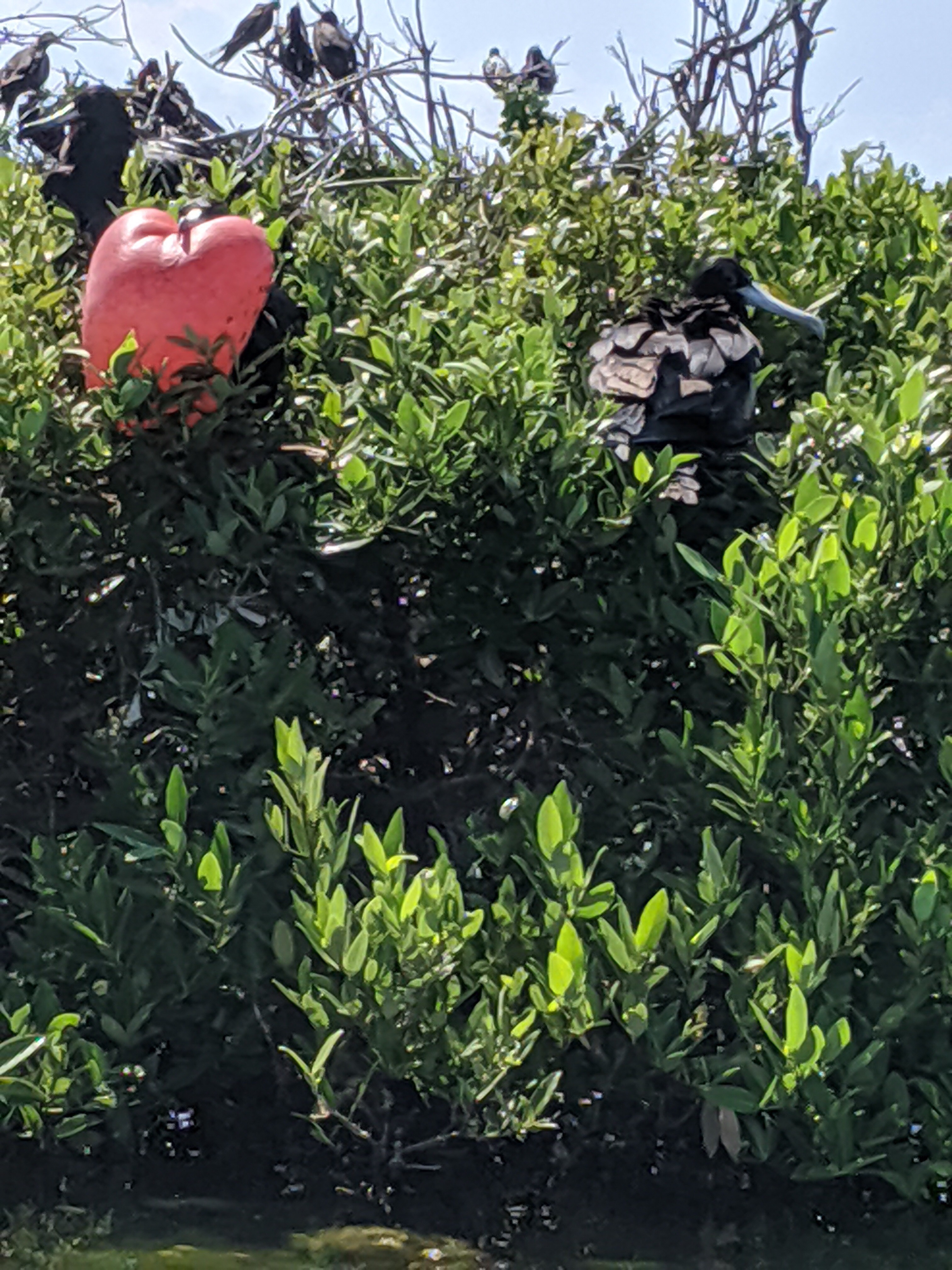 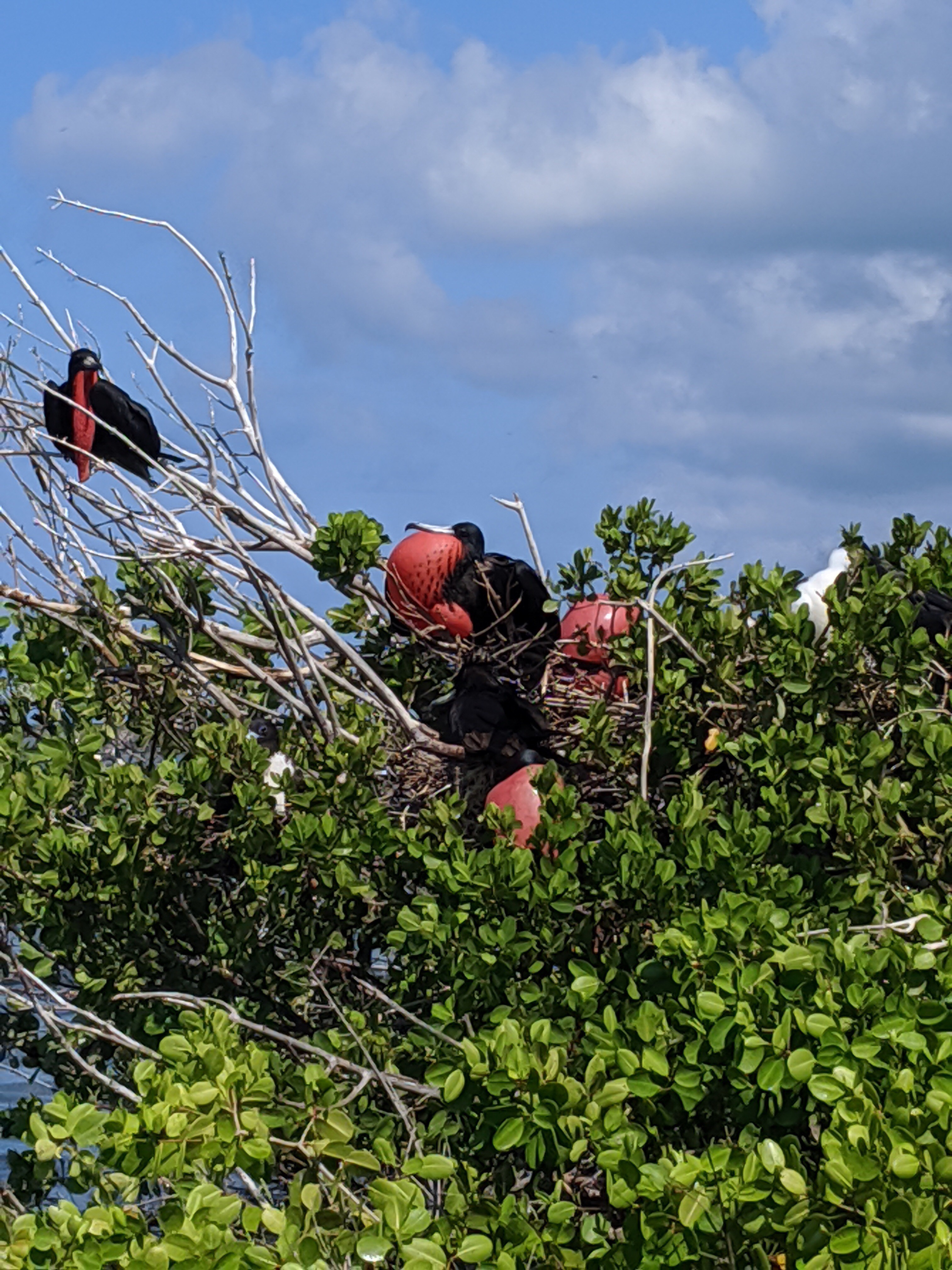 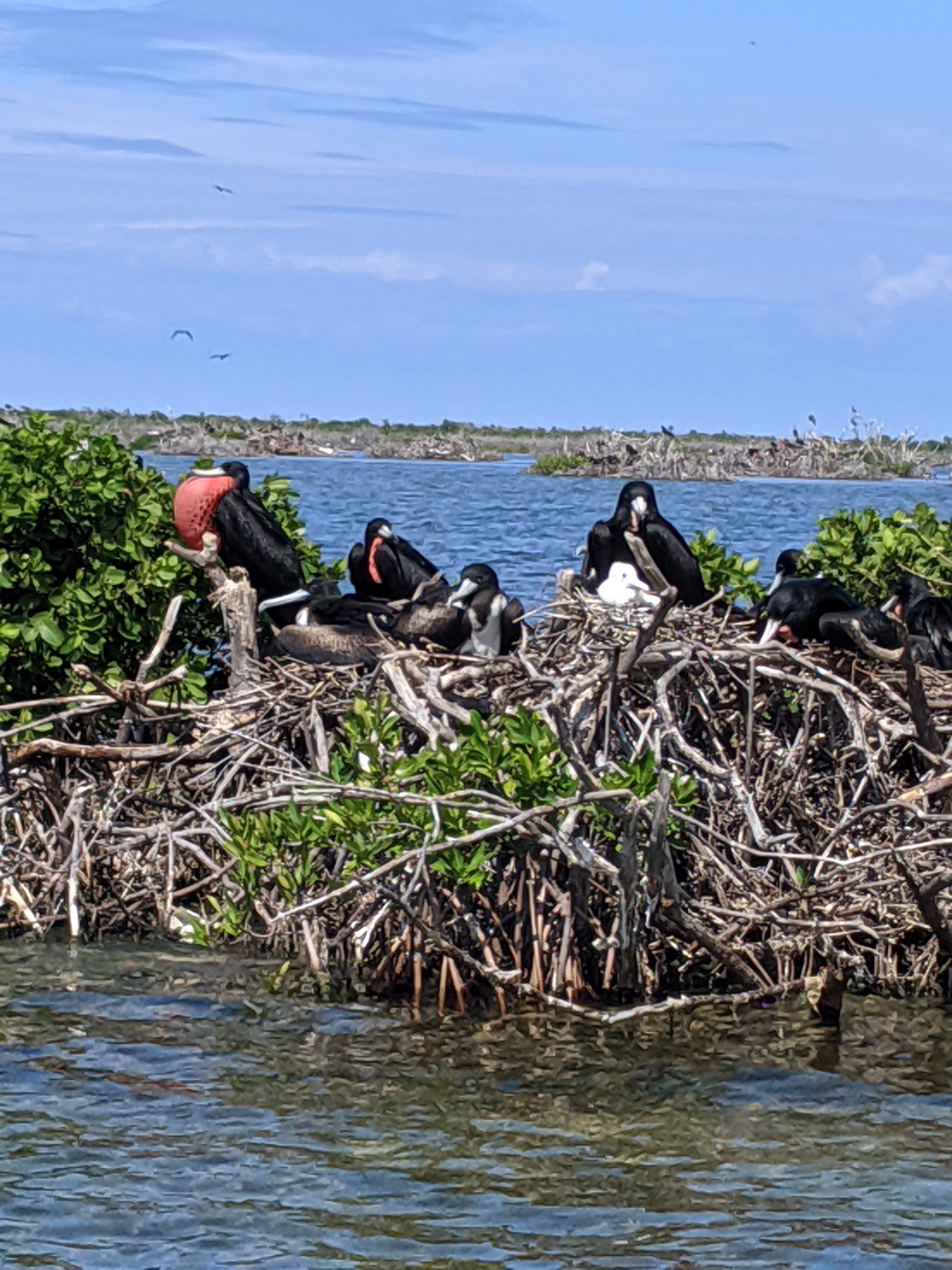 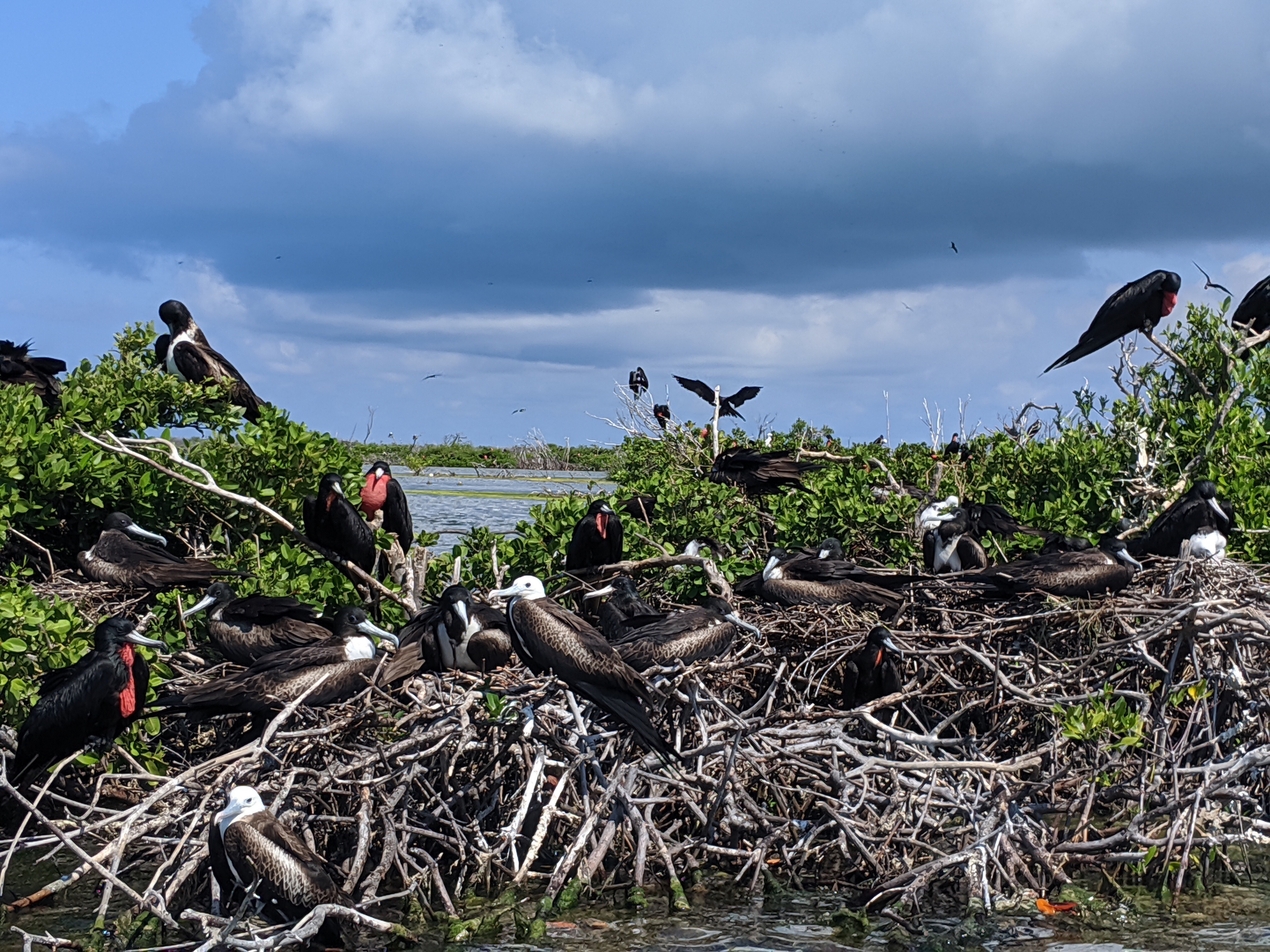 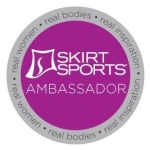