After two and a half weeks in Luperon, we finally had to drag ourselves away from the cruiser-friendly, super-fun community. After clearing out and getting our despacho paperwork from the naval commandant, we had an early night because we planned to leave the harbor before daybreak. This would become a theme for the rest of our sailing season. Why? Because we are far enough south now to be affected by the trade winds – the prevailing easterlies that blow 15-20 knots pretty much constantly, unless they are disrupted by a storm or other natural force. For the rest of this season we will always be trying to travel east, and sailboats cannot sail directly into the wind. We have the option to tack back and forth in a zig zag pattern to make progress eastward, at least doubling the distance we need to travel, or we wait for weather windows of light winds and calm seas and motor like heck as far as we can until that window closes. Also, we’ll start most of our travel days in the dark, because land creates a night lee of calm wind close to shore, disrupting the flow of the trade winds until the sun heats up the land and wind and waves return in the afternoon. If this sounds complicated, it is! Most of us sailboat cruisers have been poring over the same guide book, treating it like the bible for sailing in these waters; “The Gentleman’s Guide to Passages South– The Thornless Path to Windward” by Bruce Van Sant. We’re all, “Van Sant says this” and “Van Sant says that” as if we are members of the same cult. If you’ve read this far, you may have drunk the kool-aid 🤣

So anyway…. five boats left Luperon harbor around 5:00am, all heading east toward Samaná, more or less using the Van Sant method. The weather report predicted light winds, but we were seeing 15 knots directly from the east. We motored straight into it until the beautiful town of Sosua, where we picked up a mooring ball, ate lunch and took a good nap, planning to head out again after dark. Around 4:00, a dive boat pulled up and made us leave. (This sounds simple, but it actually required many hand gestures, the use of Google Translate, and futile attempts to negotiate to let us stay just a little bit longer) We picked up another ball nearby, only to have the same thing happen about 45 minutes later. Our buddy boats were getting kicked out as well, and several of them said “Forget it!” and just started out a few hours earlier than planned. However, as soon as they left the protection of Sosua harbor, we heard them on the VHF radio complaining of high winds and rough seas. One boat actually turned around and came back! Capt. Mike and I decided to slow roll our departure, so we hove-to and basically drifted very….slowly…. toward the mouth of the harbor then turned around and drifted very….slowly…..back. This got old, so at 9:00pm we headed out.

Outside the protection of the harbor, winds were still strong, and waves were big. Not dangerous, but because they were working against us they slowed our forward progress so much that we were only making 3 knots. Yep. We could have walked faster. We decided we couldn’t make it to Samaná at this rate, so we made a Plan B chose a closer anchorage instead and settled in for our night watches. On the positive side, after two years we finally figured out how to use our radar system! So we used the radar to stay about half a mile off-shore, or in 120 feet of water. Steering to those parameters kept us each busy and entertained during the night – almost like playing a video game.

Around 2:00am the seas finally laid down and Sanitas picked up speed. Hooray! On our next change of watch we came up with a Plan C to split the difference and travel to the harbor of El Valle. Decision made, I went below to try to sleep. When I woke up at sunrise, Capt. Mike was in a bit of a frenzy. He’d noticed a vibration in the steering wheel and a laboring noise from the motor and was attempting to troubleshoot. After checking the belts, the motor mounts, and the rudder shaft and finding nothing wrong, it was time to get serious. Capt. Mike was going into the water (in the middle of nowhere, in infinite depth) to check it out. We dropped all sails and turned off the motor, but we were still drifting at almost 1 knot. We pulled out a spare line to tie around his waist, dug out snorkel fins and mask, and put out the swim ladder. I told him I loved him, and he jumped in. After a deep breath and two exploratory dives, Capt. Mike surfaced yelling, “Hand me the knife on the steering pedestal!” I had it to him in a flash. Another couple of breaths and he grabbed the side of the boat and tossed a big mess of orange canvas and blue rope aboard. This pile of abandoned fishing junk had been wrapped around the prop, preventing it from turning and messing with our ability to steer. Scary as it was to get into the water while at sea, at least Capt. Mike had quickly found the smoking gun and fixed it. Ten minutes after we stopped, we were back underway.

Finally, around mid-afternoon we approached the harbor of El Valle. It had been a long couple of days, and we were ready for a rest. As we approached the anchorage I couldn’t help but exclaim over and over again, “This place is gorgeous. Oh my gosh, this is so beautiful!” The vibrant green mountains were steep as fjords, and we were headed straight for a sandy beach rimmed with palm trees. We had found a perfect tropical paradise for the night as the reward for all of our efforts! 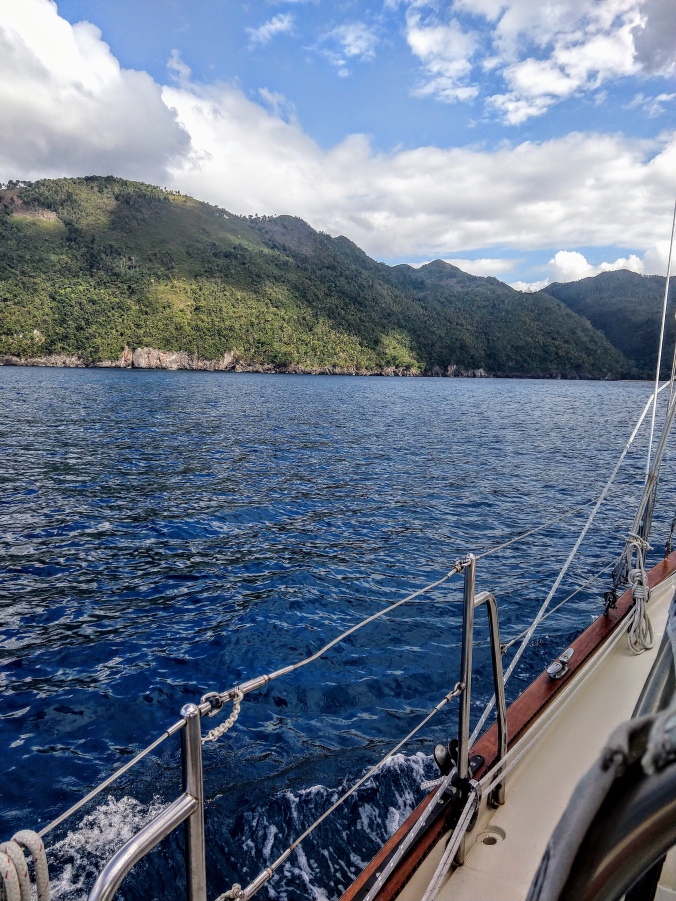 From a distance, our paradise looked deserted. But as we got closer, I noticed a small thatched roof shack. And couldn’t help but hear the loud music. Although we’d been awake all night, I couldn’t just cook dinner and go to sleep without exploring! So I convinced Capt. Mike to swim ashore with me to avoid the trouble of putting the dinghy in the water. Great decision! It felt wonderful to stretch our legs on the sandy beach, and to climb and play on the rocks. And then! We rewarded ourselves for our successful long sail with fresh pina coladas. Served right in the pineapple! Yum, yum, yum! Did I mention how much I love the Dominican Republic? ♥️🇩🇴 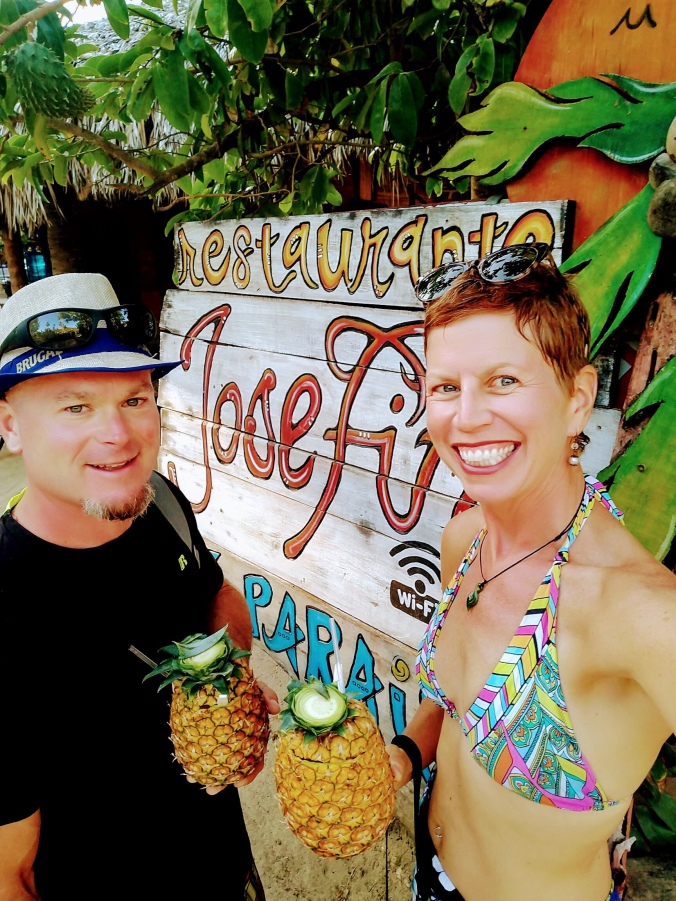 4 thoughts on “We’re on the Thorny Path Now!”