Soon after New Years, we reluctantly pulled ourselves away from the pleasures of Key West and headed north along the Florida Keys. We were ready to go! Boat clean, laundry done, last trip to the grocery store complete. (I must have done a “last trip to the grocery store” at least five times in Florida) Our plan was to stop in Boot Key Harbor in Marathon for a few days, then stage ourselves off Rodriguez Key, near Key Largo, and watch for a good weather window to cross the Gulf Stream. The Explorer Chart Books describe a good weather window for a Gulf Stream crossing as “Yesterday’s breeze was SE at 15 knots or less, and today’s forecast is clocking toward S at no more than 15 knots, and tomorrow’s forecast is S-SW at no more than 15-20 knots.” I was thrilled to finally find that specific definition of a good weather window, until I realized how rare those exact conditions would be. Especially in winter when we actually want to cross! 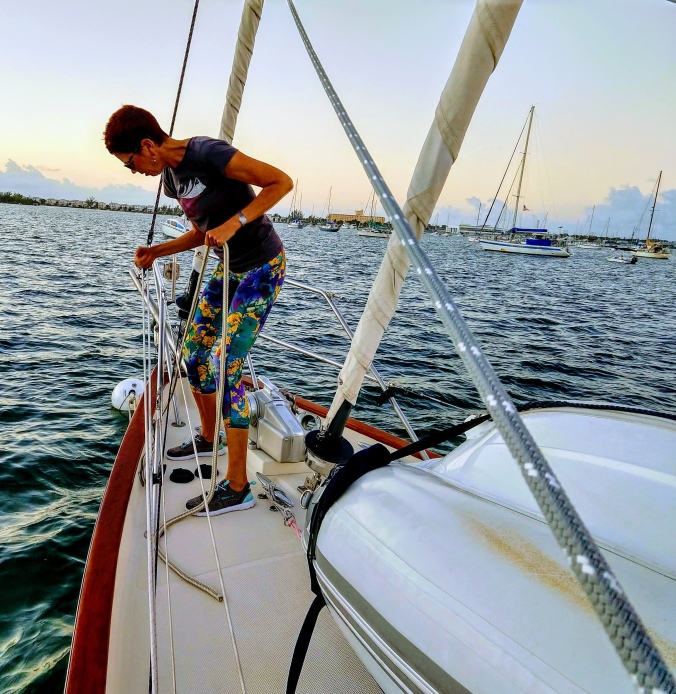 Our friends on SV Eileen had been waiting for a weather window for close to a month. An hour into our trip, as we were still motoring through heavy Key West boat traffic, they texted us, and said they were leaving Marathon for Bimini TODAY, did we want to join them. As Capt. Mike and I debated changing our plans and heading straight for Bimini (Even though we hadn’t topped up our fuel tanks in Key West. Even though my new boat cards were scheduled to be delivered to the city marina in Marathon today. Even though we hadn’t planned to do another long overnight passage so soon) the alternator overheating alarm went off. Yep. The same alternator regulator that we had just replaced. That pretty much made our decision. Not safe or smart to leave the USA until we had that issue finally beat. So we turned off the motor, hoisted all sails, and enjoyed the best day of sailing we’d had so far this season. While….also…. continuing to trouble shoot that darn regulator.

The manual for the regulator is about 12 pages long, and I read every word on every page at least three times, trying to make sense of it. I’m not that kind of engineer! Eventually, we narrowed it down to one of two problems: either the regulator was calculating the amount of time it needs to stay in bulk charge mode incorrectly, or the Belt Load Setting was wrong and asking the alternator for too much power. While sailing, Capt. Mike dug our the little magnetic programming tool and wrestled with the least intuitive user interface ever and reprogrammed the belt mode. (To “B-9” In case you are currently troubleshooting your own alternator regulator and need specifics) That did the trick! We ran the motor for two hours, and the temps never got higher than 72 degrees Celsius.

Of course, having a working motor again made it much easier to enter Boot Key Harbor. We focused on efficiency! Only 20 minutes tied to the Marathon Marina fuel dock to top up diesel, dinghy gas, and water. Then find a place to anchor in the super crowded harbor. Then get Bug in the water and make it ashore before Boot Key Marina Office closed to pick up my package and to get shower keys. Phew! All chores complete, I twisted Capt. Mike’s arm and convinced him to walk across the street to the Overseas Pub for dinner, and AYCE barbecue ribs. We’ll start cooking tomorrow. I promise!