We crammed an awful lot of socializing into one full day in Sarasota: meeting Skirt Sports friends for a run; brunch with Capt. Mike’s cousin; catching up with a college friend, Scott; and happy hour with Pat and Melana of SV Tapati. Scott even spent the night on Sanitas – our first overnight guest! 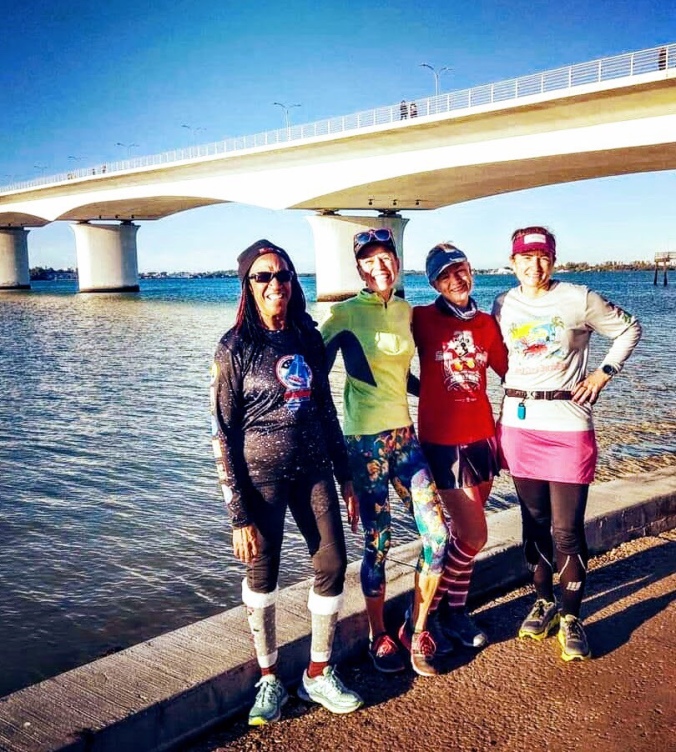 Then we got serious. It looked like we had a good weather window to cross the Gulf of Mexico in a direct line to Key West. We’d have very light winds during the day, necessitating use of the engine, but winds were expected to increase, allowing us to sail overnight. Planning an average speed over ground of 5 knots, we’d make it in about 35 hours, or before sunset on the second day. So we’d need an early start from Sarasota. 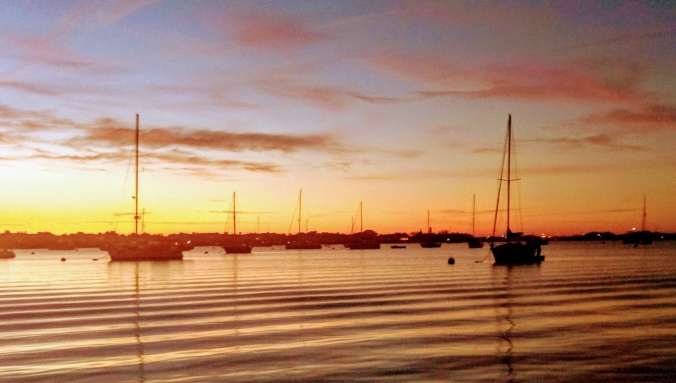 Capt. Mike and I had our first fight of the season (we’re getting a lot of firsts out of the way) The Siesta Key drawbridge bridge is about 1.5 miles from the mooring field and it opens every half hour starting at 7am. We were all packed up and ready to leave at 7am, but Capt. Mike kept putzing around belowdecks; making coffee, looking for a hat, reading Facebook. He said, “We don’t need to leave until 7:15.” Well, The runner in me did the math, and knew that at 5 knots, or a 12-minute mile, we wouldn’t make it to the bridge before it opened. So I pushed for an earlier start, starting the motor, going up on the bow to release the mooring lines, generally nagging. Finally, Capt. Mike got his butt in gear and we were off. After leaving the mooring field and making our way back into the ICW channel, the clock said 7:22 and the drawbridge was not even in sight. Even at full throttle, we couldn’t get there in time, missed the 7:30 opening, and had to make BFC’s until 8:00. Believe me, there were a lot of “I told you so’s” on Sanitas that morning. Then we had strong current against us while trying to make the next bridge, at three miles away, so we missed the next opening as well. So much for our early start.

We exited “The Ditch” (aka the ICW) at Venice Inlet around 10:45 am on Christmas Eve, waving to all the families celebrating the holiday by fishing. Goodbye land! We’re heading out to sea! 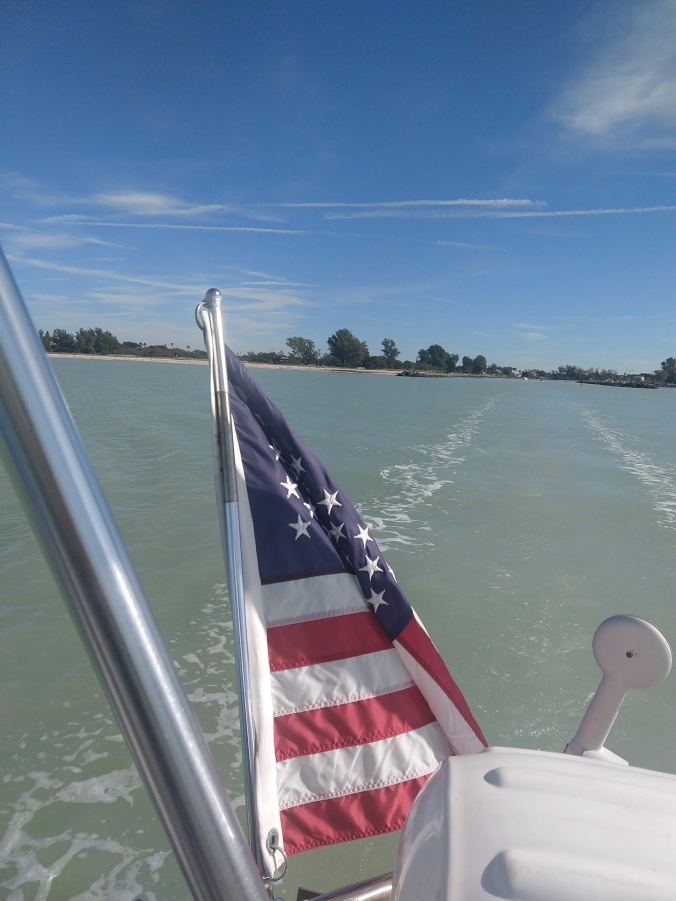 The rest of the day was sunny, calm (completely no-wind calm!) and uneventful. 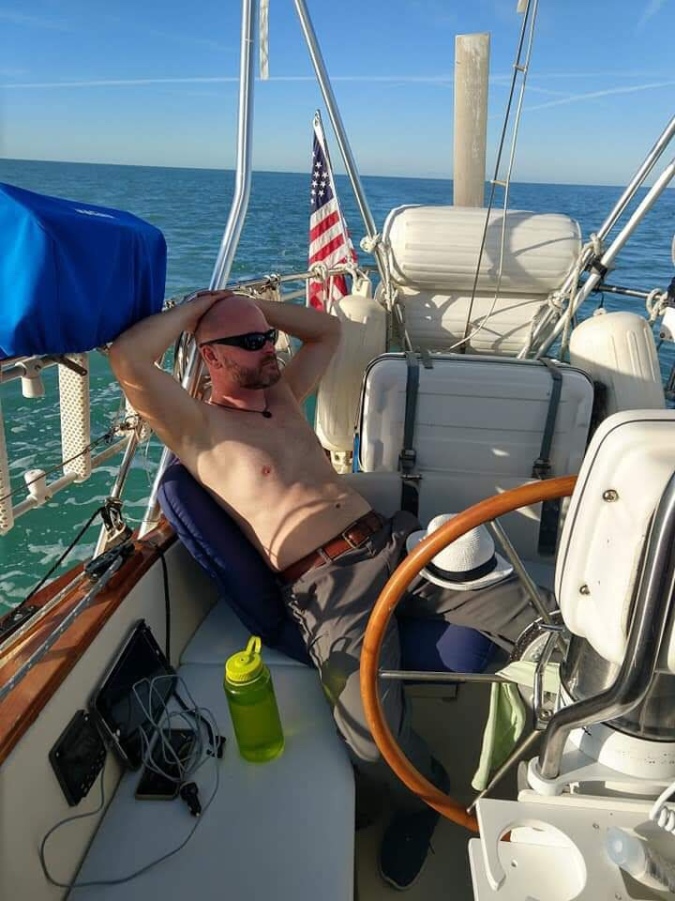 Except, in a sense of deja vu, we learned that when we ran our motor, it wasn’t charging our batteries. Exactly the same problem we had while sailing from St Petersburg to Key West last season! So once again, we had the unpleasant experience of running the generator while motoring, with all the noise and gasoline fumes that entails.

After a truly stunning sunset, Capt. Mike tried to nap in preparation for a long night, and I stayed at the helm.

Around 9:00 I noticed that the wind had changed direction and picked up speed, as predicted. Maybe we could finally sail! I unfurled the jib, and trimmed the sails to the new wind direction on a beam reach, and put the motor in idle. I’m sailing! I’m sailing! With the motor and generator off, we buzzed along between 5 knots and 7 knots for the rest of our trip. Right up until we entered the busy channel and cruise ship port of Key West. 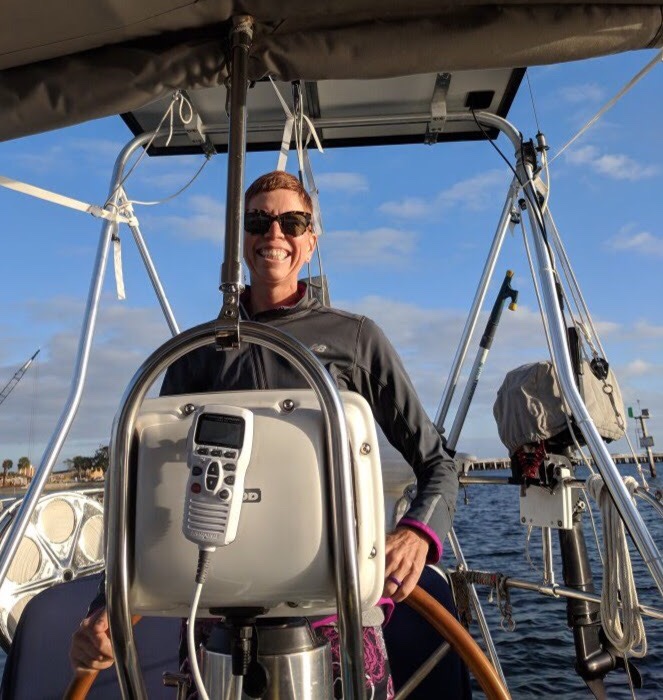 Unfortunately, as we left land further and further behind, and crossed the open water west of the Everglades known as Florida Bay, the seas became much rougher. Waves were only 4 to 6 feet, but they came about three seconds apart, directly on our beam. And the size and direction of the waves was inconsistent or “confused” causing Sanitas to pitch and role instead of settling in of a comfortable heel. Apparently I hadn’t done a very good job of making things ship shape before the passage, because we now had bags, shoes, books, and pillows strewn all over the floor of the cabin. We both had a very hard time getting any rest while not on watch, because the motion was unsettling, and the noises of stress on the boat and waves crashing into the hull kept me jumping up and calling out, “Is everything ok out there?” We kept our PFDs on, and ourselves tethered in the cockpit. And when Capt. Mike decided it was time to reef the mainsail, he came below to get me because we have a rule – no leaving the cockpit at night without the other person watching. Although we don’t plan to ever have a man overboard situation, I’d sure want to know about it if it happened!

We were escorted by a ghostly flock of seagulls all night long. I speculate that our green running light attracted bugs or small fish, and the gulls kept pace with Sanitas diving and calling and eating until they were stuffed. They didn’t give up and leave us until sunrise.

Around noon on Christmas Day, Capt. Mike called out “Land-ho!” Of course it was a Costa Cruise ship at the pier, not actual land, but close enough. It took another three plus hours to make it through the Northwest Channel, around Fleming Key, and into the Garrison Bight mooring field where Chris and Stan of SE of Disorder welcomed us and helped us pick up a ball. About 180 nautical miles, and 32 hours of travel (most of it under sail) and we’d arrived! No fancy Christmas dinner for us, we were happy to nosh on baguettes, brie, and charcuterie, watch Love Actually, and go to bed by 8:30 to make up for a night of no sleep. 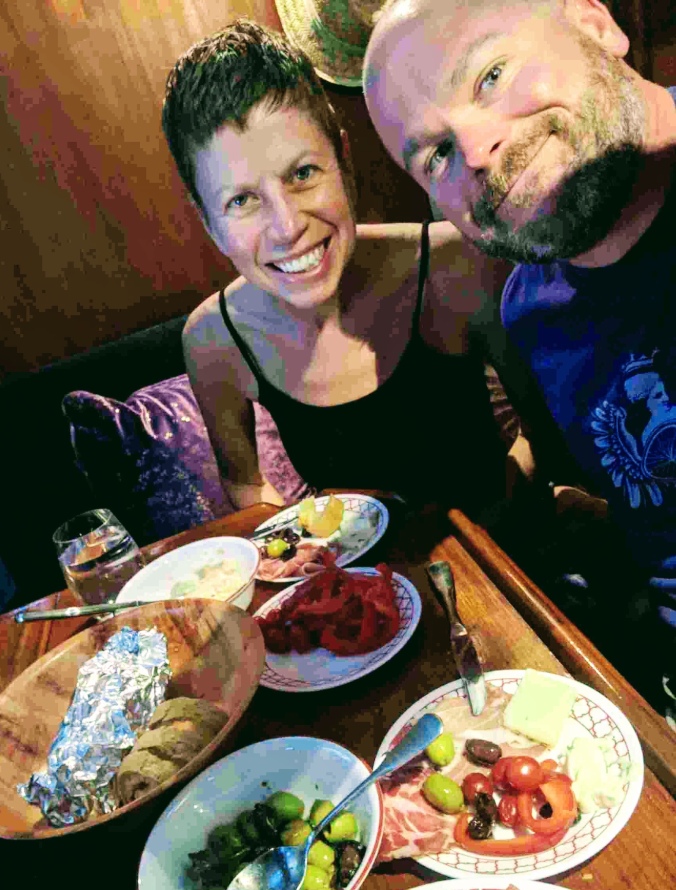 One thought on “Key West or Bust”