San Sebastian is known as a foodie city. It possesses 18 Michelin stars. Eight percent of it’s population belong to gastronomic societies. And eating is entertainment! But you don’t have to be on a Michelin star budget to enjoy great food – you just have to indulge in some pinxtos.

Look at all that deliciousness!

Pinxtos are the Basque version of the Spanish tapas. It’s a snack, usually eaten standing up at the bar or outside the restaurant with a glass of wine, to tide you over between the end of the work day and the late Spanish dinner. But here in San Sebastian they’ve elevated pintxos to a culinary art and it’s easy to make a meal of these tasty morsels. After four days of pinxtos tasting, here’s what I’ve learned….

When restaurants brag about being on the “100 best pinxtos bars” list you know there’s no shortage of hot spots. My method is to follow the crowds – if it’s busy, there’s probably a good reason. And you don’t have to stick to Old Town’s “Pinxto-landia” theme park vibe and tourist crowds. The trendy Gros neighborhood is also amazing.

Because you only order one or two small plates at each establishment, the crowds ebb and flow quickly – just loiter outside and people watch for a few minutes until there’s room at the bar. And if they ask you to pay each time you order something, it’s a tourist trap! Traditional places will let you order a round, maybe two, and when you’re ready to leave they’ll have magically remembered what you ordered and present a perfect tally.

It can be kind of intimidating, especially if there’s a crowd and if the bartender’s speaking Basque! But stay cool. Just kind of wander through and check out the crowd, the platters of deliciousness displayed on the bar, and the chalkboard of “plates of the minute” hot pinxtos specials. Unless you see something amazing and creative, stay resolute and don’t be tempted by the cold pinxtos that have sat out all day. And DEFINITELY don’t ask for a dinner plate. A local told me “it breaks his heart” every time he sees a tourist with a huge plate of stale, bad pinxtos. Instead, order a “txach” of Basque cider, poured from a great height. Or a “gintonic” served in an oversized wine glass with bruised citrus rind, a few juniper berries, and lots of ice. Or keep it simple and go with a vino blanco – the house white is probably perfectly adequate and will only set you back about 1.20€ Now that you’re fortified with a cold beverage, order a hot pinxto from the chalk board. You might have even had a chance to check out what everyone else is eating to discover the specialty of the house. Don’t worry if you can’t translate exactly. It will probably be delicious, and if it’s not quite your thing, well there’s always the next bar down the street! Don’t forget to say thanks a lot, or “Eskerrik Asko” if you remember “Scary Costco” you’ll be close enough.

When I copied the description of the “rice of the day” at Atari into Google Translate I got back “Sailor rice with seaweed ali-oli and salicornia”. While that doesn’t sound very appetizing, it was actually the most delicious clam risotto served with two tiny clams on top and some sort of frothy green emulsion, topped with a few strands of a crisp, salty sea vegetable – easily one of the best things I’ve eaten in years. 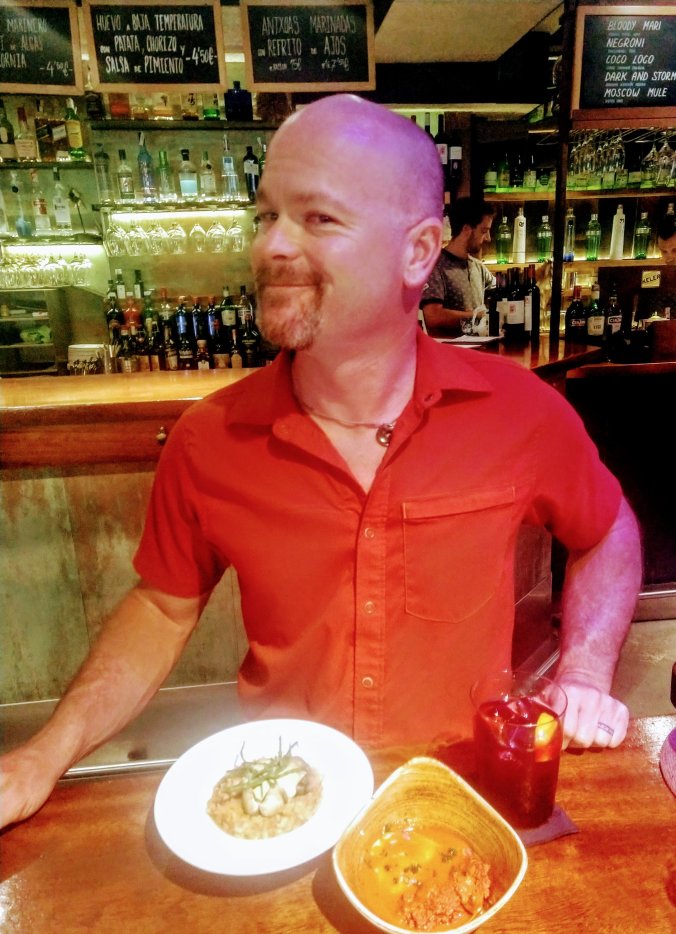 “Sailor rice” and “Huevo cooked at low temps” at Atari

While you’re waiting for the kitchen to prepare your hot pinxto, ok – go ahead and help yourself to a cold one from the bar. You’re only human after all! 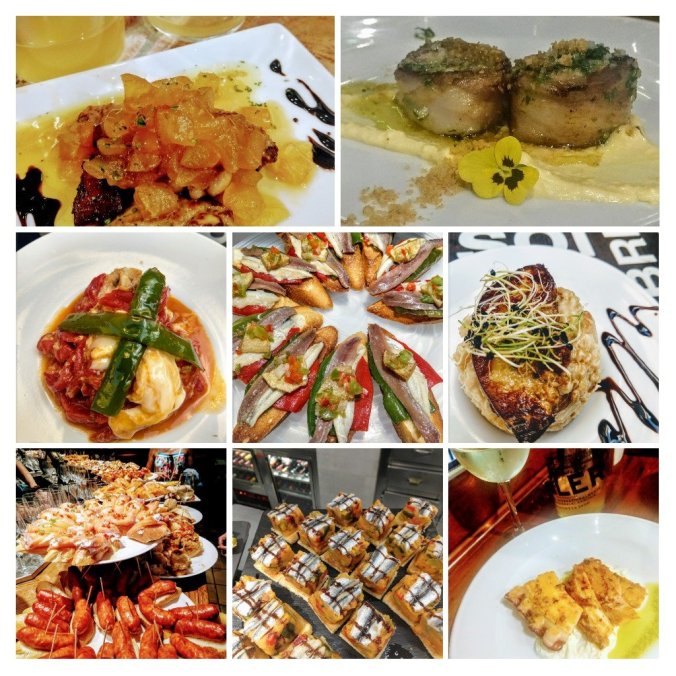 Some of the best pinxtos from our tour

Other highlights from our pinxtos exploring?

We stumbled upon the wonderful La Cuchara de San Telmo because a) it was crowded and b) several men wearing shirts from the local rowing club were drinking beer outside the entrance, and when we peered inside and hesitated one said “very delicious” in a strong Basque accent.

We treated ourselves to seafood pinxtos from the special 20th anniversary menu and they were some of the best of our trip. Grilled octopus with homemade tzaki and chimichuri sauces, and sea scallops wrapped in Serrano ham and served with a fresh corn emulsion and crunchy granules of toasted corn. OMG! 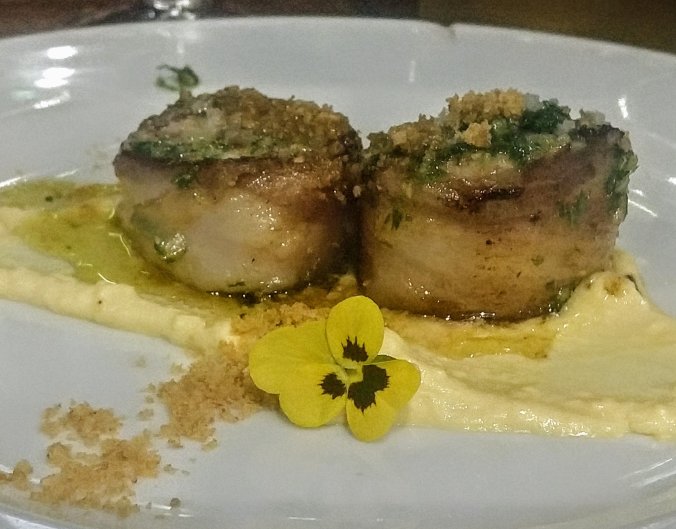 The name of the bar is fun too. Back when San Sebastian was being built, the church of San Telmo was considered the “poor people’s church.” In fact, they ran out of money and never completed the wall which still shows the rough unfinished sea rock known as cucha today. The rich merchants started using the name “cucharas” as an insult for the working class folks who couldn’t even afford to finish their church. Today, many San Sebastian natives have taken back the name, and embraced it with pride as their own nickname.

We really enjoyed the grilled pequillo peppers at Bar Tamboril because, except for olives, they were the only green vegetable we’d eaten since we arrived.

Wherever you go, and whatever you order, don’t forget to introduce yourself to the person next to you, relax and enjoy the setting sun reflecting off the stone walls, and to laugh and tell stories! You can’t go wrong!