From the moment I first saw the silhouette of the mountains of the Dominican Republic far in the distance as we sailed toward them at sunrise, I KNEW I wanted to hike them! Easier said than done. Pico Duarte mountain in the Jose Armando Bermudez National Park is more than 130 km from our anchorage in Luperon. And you can’t just show up and do the hike. Park regulations require you to hire a guide and mules, and the hike is long enough that you need to plan to spend at least one night near the trailhead the night before and the night after, and one night camping near the summit. So I set to work researching my options, and eventually booked an organized trek through Rancho Baiguate in Jarabacoa. But once I had booked this epic trip which was definitely NOT within our usual cruiser budget, I was NOT going to hire a car and driver to take us there at ridiculous cost. Instead, it was back to the internet to research busses on Spanish language websites that challenged every bit of my (and Google’s) translation skills. But we did it! And here’s how that journey across the Dominican Republic went down….

At 6:30am, our friend Brian of Tanda Tula kindly ferried us to shore in his dinghy, so we wouldn’t have to leave ours unattended at the government dock for days. Then we hauled our bags about a kilometer across town to the taxi stand to catch a Guagua, or shared taxi. This mode of conveyance (named after the sound of an old timey car horn) is a cheap way to travel within a town or between towns. It cost us 65 pesos per person to cram into a propane powered sedan to travel to the next closest town of Imbert. Including the driver, they wait until they have three people in the front seat, and four people in the back seat, and then they take off!

Once we arrived in Imbert, we simply crossed the street to the Javilla Tours bus station and looked for the boleteria, or ticket window. These van-sized busses only go one place – to the next biggest town of Santiago, so buying a ticket was easy. 130 pesos each and we were on our way! It was surprisingly organized. They gave everyone a deli counter number, so there was no rushing for the next bus. Everyone just lined up politely and got on in numeric order. But then we ran into our first problem. Capt. Mike was trying to track our progress with Google off-line maps and he had just said “We’ve got about 15 minutes to go” When I said “Wait! Isn’t that the Caribe Tours bus station? ” Darn Google! We traveled about half a mile in the wrong direction because neither of us knew how to ask the bus driver to stop in Spanish. Finally I decided it was better to embarrass myself than to keep going the wrong way, so I jumped up in the aisle and started waving my arms and saying stop until the bus pulled over. Phew! Now we just had to reverse our track on foot back to the big yellow bus station. 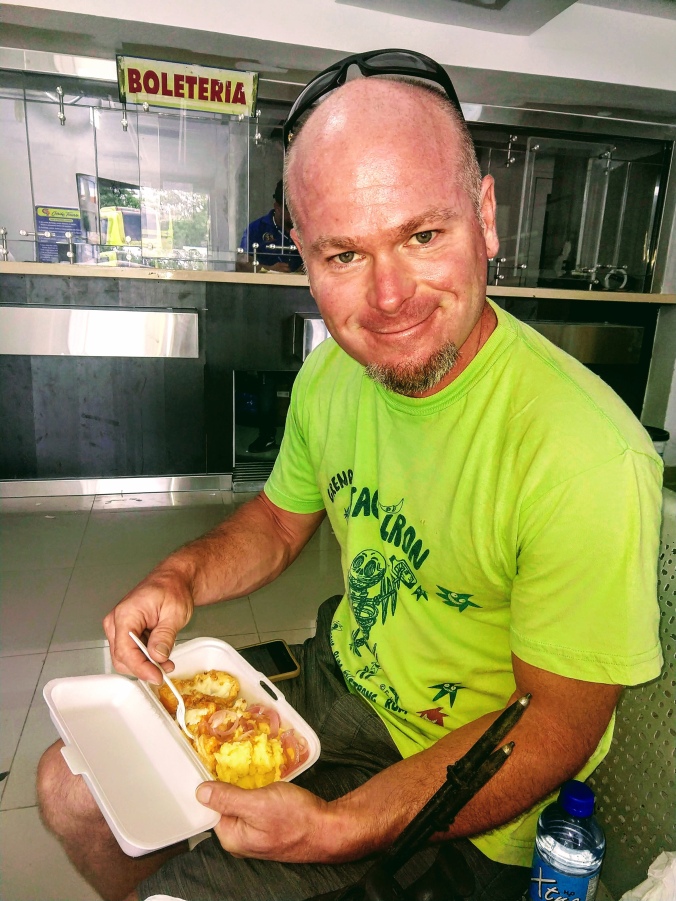 Caribe Tours busses connect the big cities of the Dominican Republic, and they are more like Greyhound – air conditioned with WiFi and toilets and even a movie. Heavenly! It cost us 100 pesos each ($2) to catch the Caribe Tours bus to La Vega. After that, the busses to the mountain resort town of Jarabacoa are few and far between, so we had a while to wait in the La Vega bus station. Plenty of time to explore the various food shacks around the block and to decide that our best options for a gluten free lunch, with our limited Spanish, was to point at whatever was left on the breakfast buffet. We ended up with the rest of the fried eggs and a huge scoop of mashed potatoes with pickled onions for each of us. The woman who served us was very patient, but everyone in the kitchen stuck their heads out the kitchen window to watch the crazy gringos try to order breakfast, lol.

I stuck to my theory that it was better to embarrass myself than to miss my bus, so every time a new bus pulled into the station I’d pop out of my seat and ask at the ticket window, “Jarabacoa?” They took pity on the poor gringo and told me when the right bus arrived. Another 100 pesos each, and we climbed aboard our final bus. All that planning worked out, ’cause if we missed that one, we wouldn’t have arrived at the lodge until after dark. Once we arrived in the resort town of Jarabacoa I fought the cell phone service and my own terrible Spanish and finally got through to the lodge who sent a truck to pick us up. 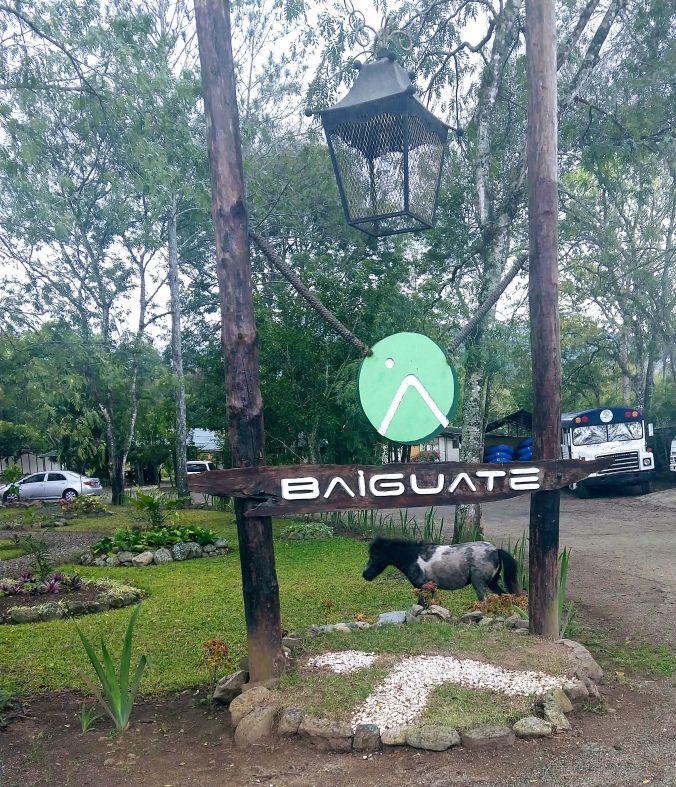 Suddenly, we were transported to paradise! The lodge is set in a lovely wooded glen filled with flowering tropical plants designed to attract butterflies. There’s a river, and a swimming pool, and even miniature horses wandering through the grounds on their own. The restaurant is open air with a tin roof that goes “BANG!” every time a mango drops from a nearby tree. Those street shack eggs and potatoes seemed like a long time ago, so we browsed the lunch buffet and found salad! and vegetables! and roasted eggplant! and chicken. Oh yum. This is the first night we’ve spent away from Sanitas since the beginning of November and I reveled in the queen size beds. Capt. Mike was equally excited about the hammock on the patio.

Grand totals for this day of travel adventure: 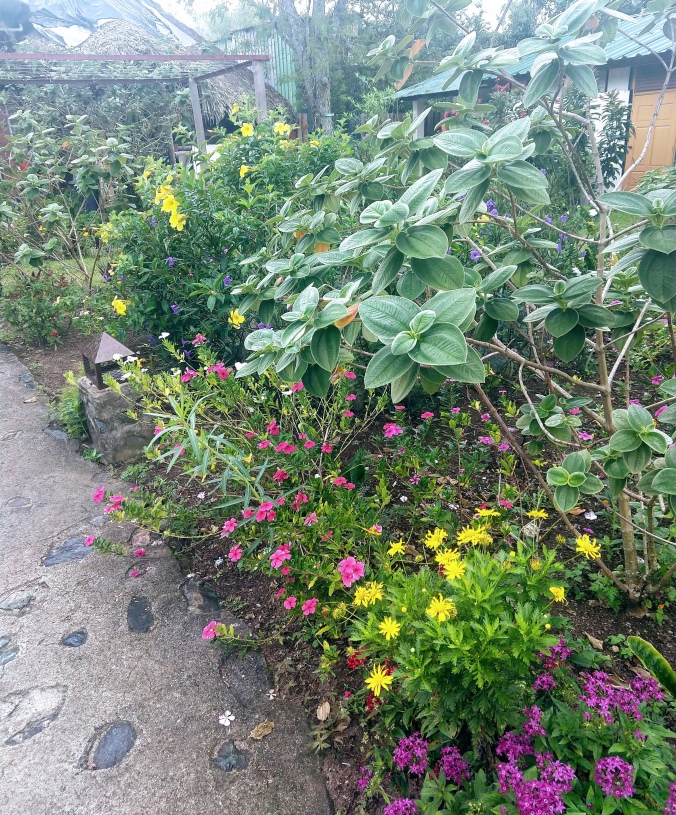