One of our main goals for the 2019 cruising season, was to make it to Little Farmers Cay in the Exumas in time for the 5Fs festival. It’s the tiny island’s annual homecoming festival, and the regatta race for Class C Bahamian wooden sloops from all the neighboring islands. It’s kind of the little brother festival to the National Family Islands Regatta that we attended in Georgetown last year. So we considered ourselves lucky to find a small weather window to leave Warderick Wells on Thursday 31 January to head south.

Slightly chaotic leaving the Warderick Wells mooring field…. the current was absolutely ripping when I dropped our mooring lines, and Capt. Mike asked where was the floating mooring ball, to make sure that he didn’t run it over or tangle the thick lines in our prop. Well, I looked to port, looked to starboard, looked forward, and looked aft but couldn’t see it. So we kept drifting in neutral, almost to the point of running aground. Finally we gave up and motored off, trying to decide if we needed to anchor and dive the boat to determine whether we were dragging a 24 inch diameter ball under our keel. But Kevin on Leef Nu dinghied over to check out our spot, and radioed to tell us that all of the mooring hardware and lines were still there, except for that big white ball. It must have popped or broken in half during the night. So THAT was what woke Capt Mike up at 4 am! We radioed the info to Sherri at park headquarters and continued on our way.

By 2:30, we were anchors-‘down near Little Farmers Cay and I’d say there were at least 100 other boats already in the anchorage. One or two of them were definitely pushing the “no anchor zone” in front of the air strip, lol. You’re the one risking your mast – not me!

We hustled to get Bug in the water and get ourselves over to the Farmers Cay Yacht Club in time for Happy Hour and FREE FOOD. Perhaps I should restate that. Where cruisers are concerned, you have to be at the front of line when free food is advertised. Our attempt to wander in an hour late was not successful. By then, the lines were long, we made our donation to the Methodist church for the buffet, got to the front of the line, and learned that all the meat was gone. So our $15 dollar donation got us each a scoop of peas and rice. Oh well. It’s for a good cause, right? And we got a chance to meet and talk to lots of fun people.

The first race of the Regatta was on Friday, and we were so excited, we couldn’t contain ourselves. We had watched the race boats come in on the mail boat and have their masts restepped. Unfortunately, the boat in this picture, Legal Weapon, got dropped and was damaged too badly to actually race.

Even though the weather was nasty with wind and rain, we hopped into our trusty Bug and dinghied out to watch the race. And out…. And out …. Only later did we learn that this was the “Ocean Race” – one long sprint from the staring line a couple miles out to the finish just off shore. So by the time little Bug made it out to the starting line, we got a quick view of the start and then and long, wet, miserable ride back through rain and waves that almost swamped us. No fun at all! But watching the start of a race up close is still very exciting. The crews start at anchor. And when the horn blows, the biggest guy starts hauling up the anchor rode, while the next biggest hauls on the halyard to raise the sail. Then there’s a free-for-all of shouting and swearing and jostling for position and to claim the best position to the wind. Be still my beating heart! 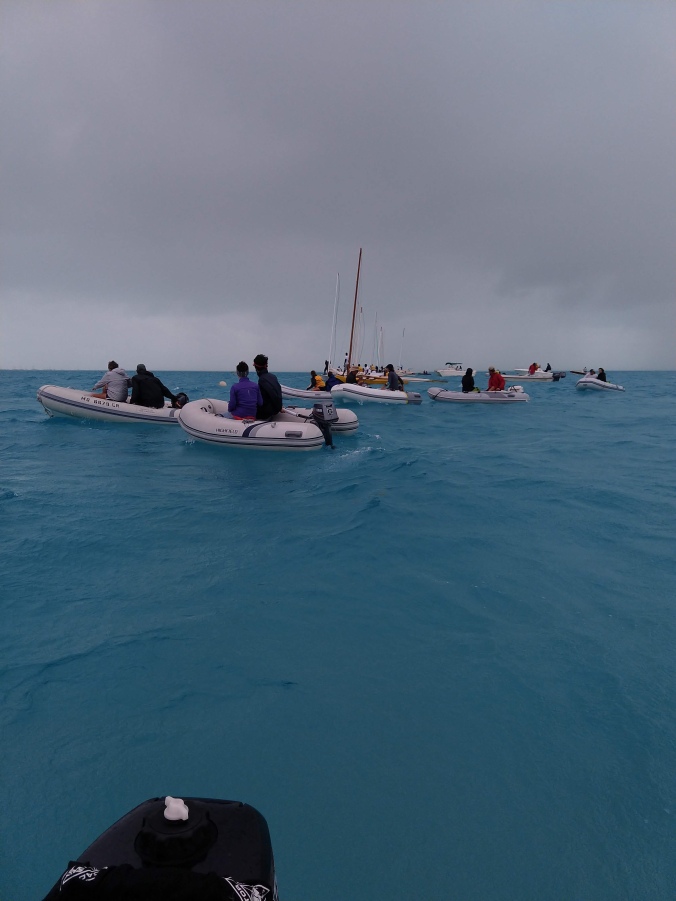 After warming up and drying off and fortifying ourselves with caffeine, we headed ashore followed the sound of dance music to the party on the lawn of the Ocean Club. Capt. Mike got scolded for assuming that the folding table covered with bottles was an honor bar, and attempting to pour his own drink. Oops. But we also had the chance to meet the captain and crew of the Long Island boat, Whitey K, and Mike gushed about how much he admired their sailing prowess. Their captain said “And we’re handsome too!” And posed for a selfie.

We learned our lesson, and watched the rest of the races from the deck of Ty’s Sunset Bar, leaving the chasing to those with bigger, stronger dinghies. Still lots of fun to listen to the trash talk between Bahamians from different islands, and to watch the betting go down. In between races, there were games, drinking, and dancing, and a pop-up conch salad stand right on the beach.

We did dinghy out a little ways to cheer on the finish of the final race. Sometimes you just gotta get right out there in the middle of things. All the more exciting because our new besties from Long Island swept the Regatta and won every race. 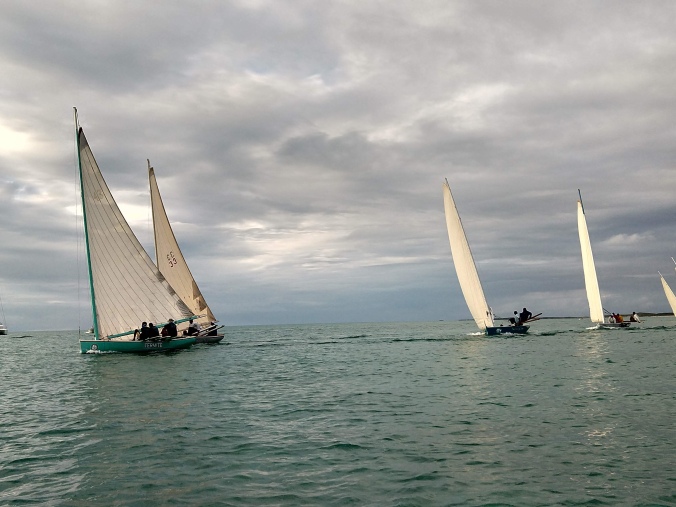 Ok 5Fs Festival. Your weather could have been better, but otherwise, you didn’t disappoint!