When planning a sail to the Bahamas, cruisers put a great deal of effort into planning the Gulf Stream crossing. For good reason, of course. The distance is significant, often requiring an overnight sail, and that river of current sure makes route planning tricky. But no one really tells you that once you’ve successfully reached the Near Bahamas islands, you immediately need to start planning your next passage.

From Bimini, a sailboat can head north to the beautiful Abacos, although the winter storms are more powerful that far north, and you may find yourself stuck waiting out a northerly longer than planned. Or you can head east east across the Great Bahama Bank to the Berry Islands. Since we completely missed the Berrys last season, we decided not to make the same mistake this time! So from South Bimini, we set off east across 90-some miles of shallow sea. And if you do the math, you’ll soon find that at a pace that’s somewhere between a fast walk and a slow jog, you can’t cross those 90 miles during the limited daylight hours available in mid-January.

Since we are in no particular hurry, we set out from Bimini Sands with SV Elixir and SV Leef Nu and aimed for an imaginary point in the middle of all that water near Mackie Shoal. The shoal is exactly what it sounds like – a giant sandbar in the middle of all that water. While you wouldn’t want to encounter the shoal by mistake, skirting the northern edge of it on purpose makes a great rest stop on the way across the Bank. Hours after we’d lost sight of land and lost cell phone coverage, we could see a very small wooden pole that marks the shoal, and we veered a bit south to get off the waypoint to waypoint route. Scanning for shallows, we decided to drop anchor in 14 feet of water surrounded by nothingness in all directions. Even with two buddy boats, our little flotilla seemed like a very small speck in a very large ocean. But the waters were calm, the sunset was spectacular, and my Thai green chili tasted way better than it ever does on land. 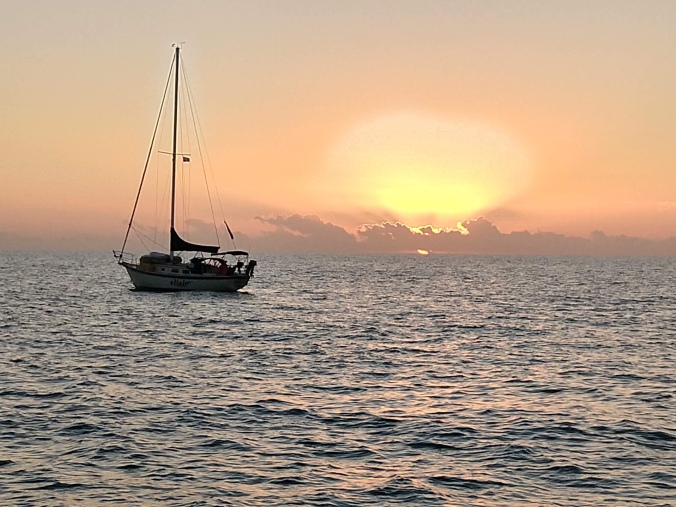 2 thoughts on “Literally in the Middle of Nowhere”