It was bittersweet to leave Georgetown and head back north to the Exumas. Sure, I knew we’d been in Georgetown long enough (almost a month all told!) and that if we were really cruisers, then our sailboat needed to move. And we missed our friends on Orion and SV Disorder and looked forward to seeing them again. But ….. Georgetown is a turning point. Either you are continuing to sail east and south to new adventures and new counties. Or you are acknowledging that this year’s cruising season is coming to an end, and it is time to turn around and make your way back to Florida before hurricane season.

So I was in a bit of a funk as we left Elizabeth Harbor and pointed Sanitas’ bow north. After a beautiful day’s sail, we returned to Big Majors Spot, near Staniel Cay and had a very fun reunion with our Dock 4 friends. And we shook ourselves out of our gloomy mood, and decided to visit islands we had missed on our speedy trip south through the island chain. 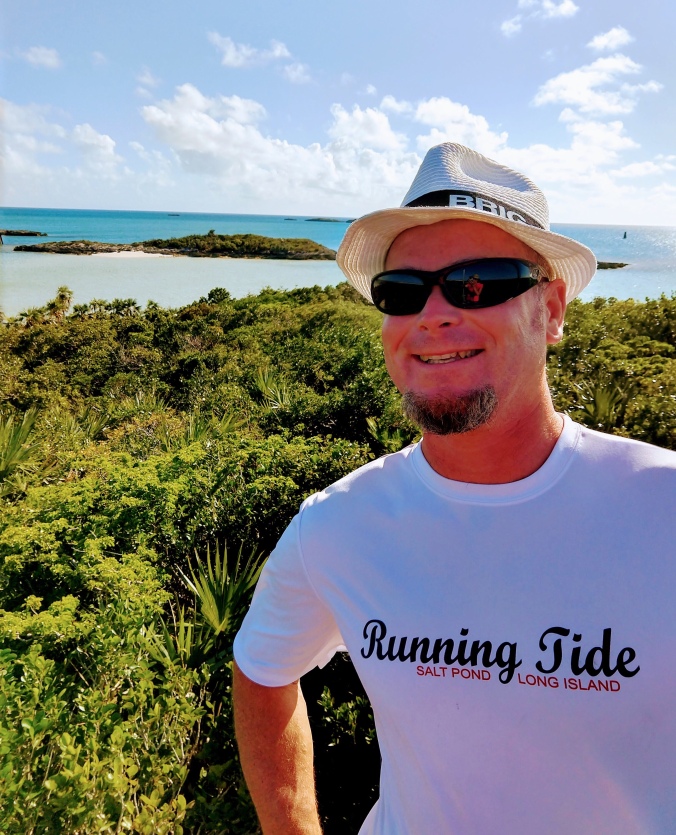 There’s pretty much nothing on the island, except for the ruins of the Decca navigation system station; a radio-based system that was a precursor to the satellite-based GPS. The ruins have sort of a “Lost” TV show feel and I tried (and failed) to imagine the lonely life of the three-person maintenance crew who lived here as castaways. This guy has been waiting for a loooooong time for a crew member to replace him!

Here’s a shot of Sanitas in the harbor with some of the navigation markers and the beautiful beach.

MV Jenny was also anchored off Pipe Cay. We’d seen her several places in the Exumas where she stood out as a tall ship with an entire garden of herbs and vegetables and flowers on her second story stern. We were able to satisfy our curiosity when her captains Dick and Alex invited us over for dinner and gave us a tour. Jenny felt more like a floating home than simply a boat….a full size refrigerator! Couches and recliners! Patio furniture! An engine room the size of a one-car garage! We really enjoyed our evening hearing about Jenny’s seven years of cruising from Maine, down to Florida, and through the Caribbean!

Next stop was Compass Cay and the famous pet sharks. 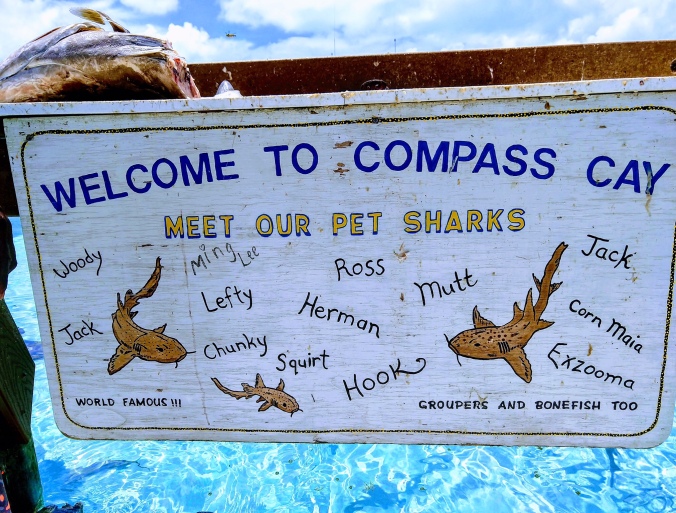 The tiny Compass Cay marina is a beautiful spot in the middle of nowhere. It’s also one of the most expensive marinas in the Bahamas, so we chose to anchor in the harbor and just dinghy in to visit Tucker and his sons’ tropical paradise. Pointing out our anchorage on the very technical island map 😜

Rumor has it that an episode of The Bachelorette was filmed here a few days before our visit. The series starts Memorial Day weekend, so I might need to watch it! 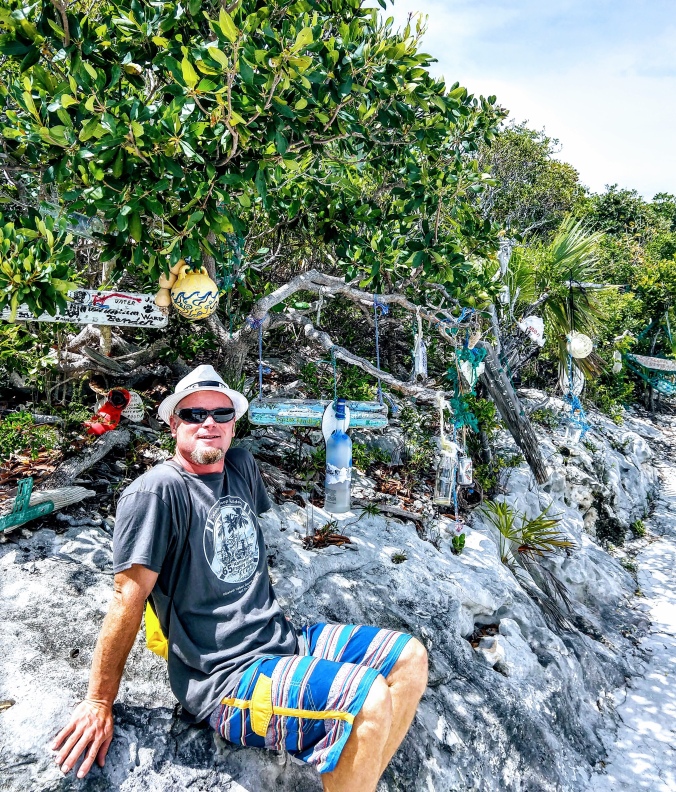 We hiked the length of the island, and then brought Mike’s famous red beans and rice to the Saturday potluck dinner. Say what you will about motor boats vs sailboats, but motor boats that stay in expensive marinas bring THE BEST food to potlucks! And this group from Cape Coral, FL were extremely welcoming and generous. We also met sailors from Breckinridge, CO on SV To The Max! Fun to get a little reminder of home!

But the real highlight of Compass Cay is those famous sharks. “Only” nurse sharks, so not technically aggressive, they still have sharp teeth and beady little predator eyes, and some were still longer than I am tall. But I figured, what the heck – they have names, so they won’t eat me. Right? So, without further ado, I jumped in.

Even though I got into the water with those critters under my own power, I still found it a little bit unnerving. I’d watch the shark in front of me, keeping my hands in fists so that my fingers didn’t look too much like little squids, and a different shark would brush me from behind. Yep. I might have squealed a little bit. 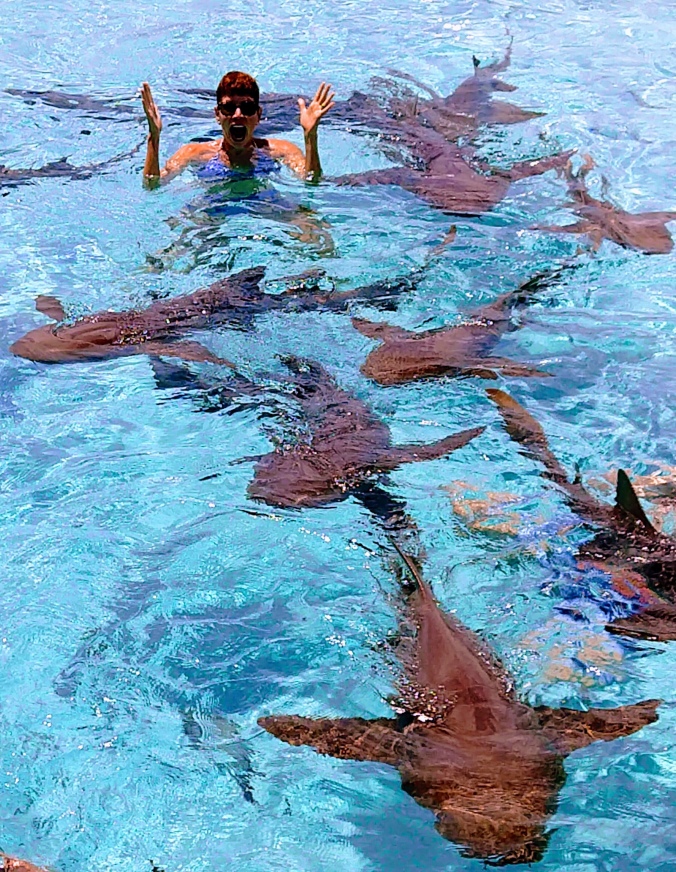 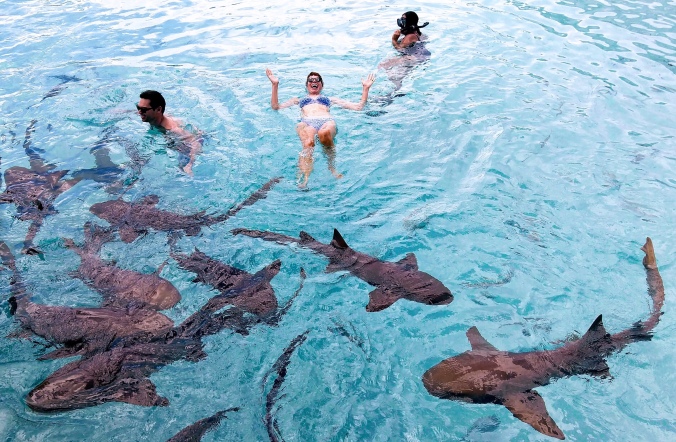 “Can’t you see them circling, honey? Can’t you feel ’em schooling around? You got fins to the left, fins to the right, and your the only bait in town”