You know the game you play, where you get to choose which famous person you’d most like to be shipwrecked with on a tropical island? (Or which ten books? Or which five foods?) Obviously you wouldn’t really want to be stuck on a deserted island with only that one person (Or ten books. Or five foods). You’d go crazy! But I honestly think I could live quite happily in Spanish Wells.

Spanish Wells is a small island off the coast of Eleuthera, and there’s been a community here since at least the 1700’s, when this town was founded by the loyalists. These were the folks who sided with the British, rather than the colonials, during the revolutionary war. Today, it is a prosperous fishing village made up of colorful houses with lovely tropical gardens. And the people we met here were the friendliest of our trip. We exchanged fish recipes in the local “everything” shop, and received waves or even offers of a ride from every car or golf cart that passed by. Now it is small, and everybody seems to be related (and named Pinder) so perhaps living here would get a little bit old. But I like to picture myself opening a beach bar, attending the local Independence Day festivities, and taking the water taxi to Eleuthera once a month for a big shopping trip.

We stayed in the mooring field here, so that we were a short dinghy ride into town. But wow was this a tight field! Only eight balls, and the first time we cruised through, only one ball was open. I stood on the bow as we drifted toward it in slow motion and kept calling back, ” It looks shallow! It looks shallower.” Until, yes. We were aground again. This time, it was less dramatic because we were going so slowly, and the bottom was soft sand. Capt. Mike swung the boom way out to the side, over the water, and hung from the boom until Sanitas tilted slightly and slid off. We anchored outside the harbor that night, and tried again for a ball in a deeper section the next day!

We explored the full length of both streets by foot, purchasing some supplies for boat projects, locally grown tomatoes (in March!), and an extra water bottle. Each day we were here, we spent some time at Buddha’s Snack Shack. Based out of a psychedelic school bus, Buddha and his wife and daughters run a funky little bar and restaurant serving creative burgers on homemade buns, delicious cracked conch, and stiff drinks. I ordered the signature “Dizzy Buddha” expecting an ordinary rum punch. But instead, it was bright green! I can’t tell you what it tasted like, or what it was made of, other than green. Glad I tried it! 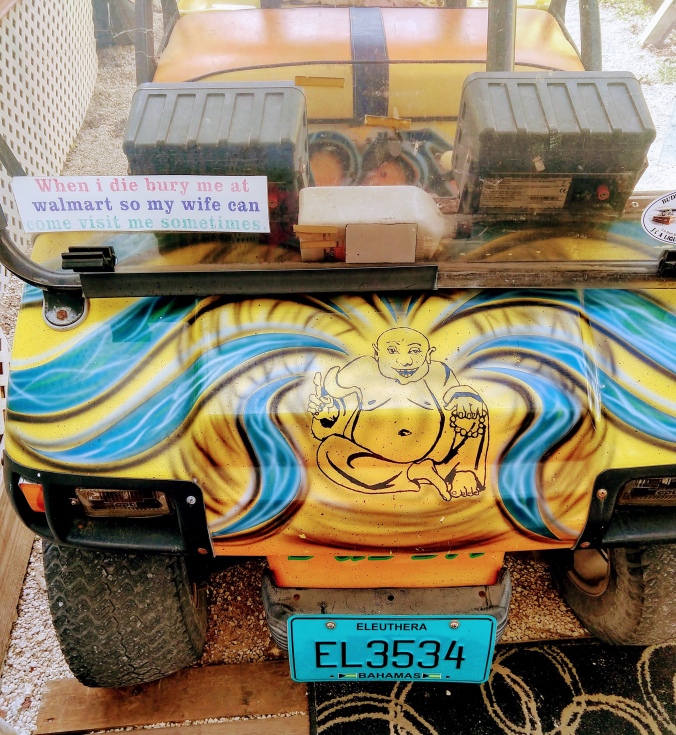 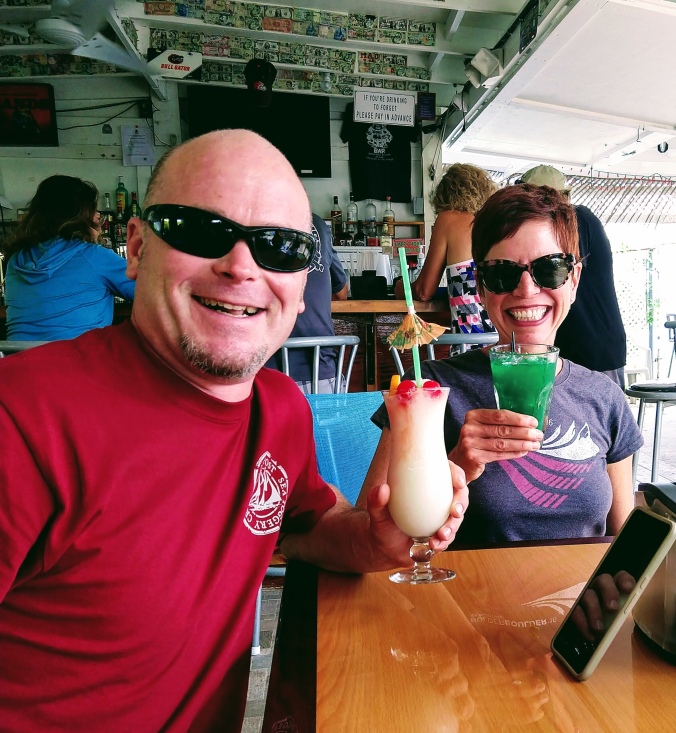 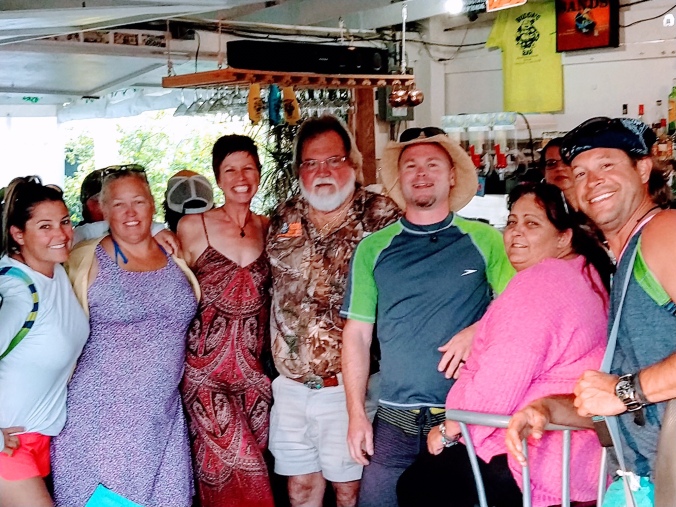 Got our photo taken with Buddha, himself!

Mike and I spent a day jogging the length of Spanish Wells, then crossing “our bridge” to Russell Island and back. It felt good to stretch our legs, and I made friends with the many goats we met along the way. Apparently, I speak excellent goat. “Mwaaaaaaaa…..”

I was only able to persuade Mike to run so far with the promise of a stop at SandBar. Good thing they posted a “Keep going. You’re almost there sign, right when we were about to give up. 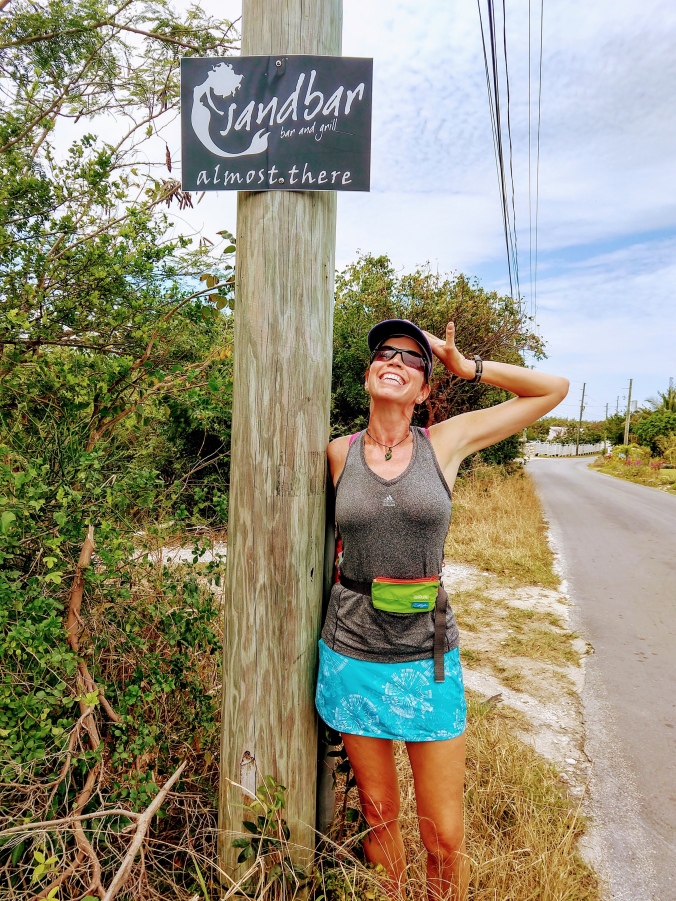 It was worth the long, hot trip to get here. A tiki hut, palapa roofs, and hammocks all facing a miniature sandy beach. We had the best blackened fish tacos we’ve found since leaving St Pete, and the Guava Lava cocktail wasn’t bad either.

Of course, tacos and cocktails made the return trip seem a lot longer and hotter. But our stop made for perfect timing to pass Bernie Sweetie’s fish dock. The boat was just drifting is as we jogged by, so we stopped to watch. No scale fish today, but some huge conch, and a bucket of live lobster. We’ll never be able to beat the price we paid for lobster back in tiny Foxtown, but here they were as fresh as can be. We watched the diver who had caught them chop their tails off right at the dock. The granddaddy 8-pound lobster looked at us quite sadly as he lost his tail. We bought a pound of lobster tails for $16 and grilled them for dinner. 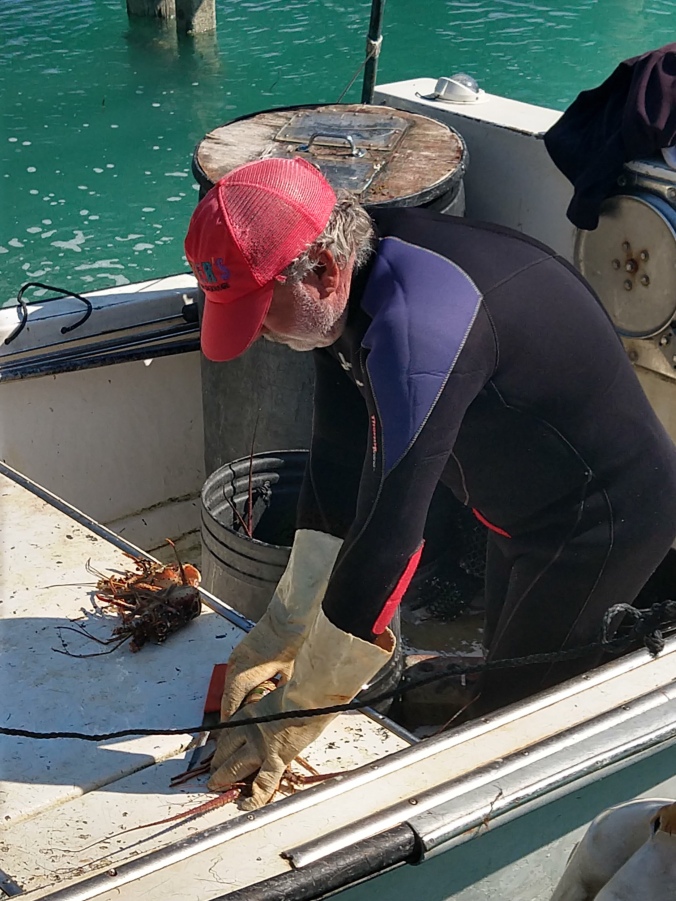 On our final day in Spanish Wells, we had a beach day on the long, pristine, sandy beach on the north side of the island. I broke out the Isle Explorer inflatable stand up paddle board that I got for Christmas, but hadn’t yet tried. This was a perfect place to test it out; calm, shallow waters, with stunning scenery to distract me just when I was starting to get the hang of it. Yep. I fell in a couple of times when I started getting too cocky. Mike took a turn and really showed me up. Just paddling around was way too easy for him, so he tried SUP yoga ( with Chris and Laura and I doing yoga poses on the beach to coach him) and then head stands. Believe me. I got some great shots of BOTH his successes and his failures. I definitely intend to return to this beautiful island someday! 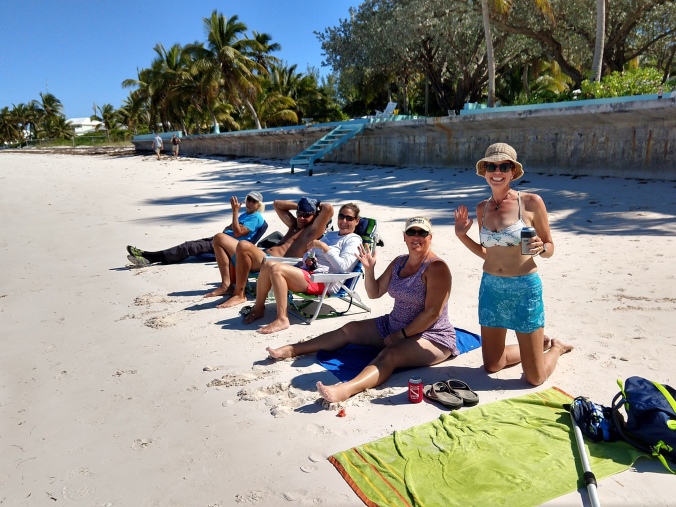 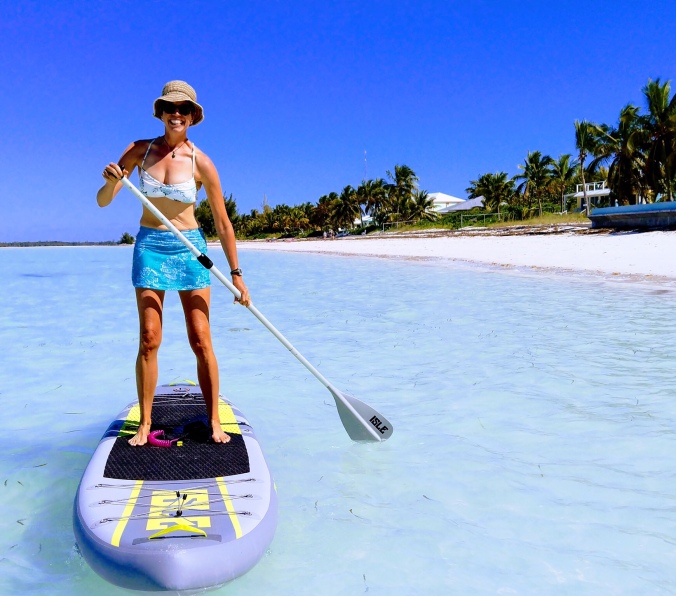 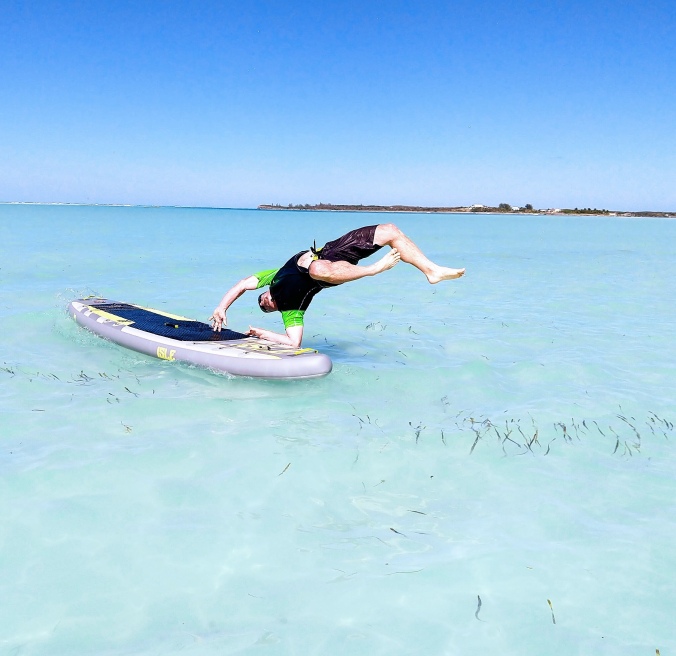 2 thoughts on “I could live in Spanish Wells”