By the end of our stay in Marsh Harbour, the anchorage grew very crowded. Many boats were hiding out from the winter north-easters, and waiting for the swells in the ocean outside of the Sea of Abaco to decrease before heading south. Exactly what we were doing! And with these winds coming from an unusual direction, the popular anchorages outside the harbors didn’t provide enough protection to be safe and comfortable. Mike and I took Sanitas out of the harbor after 8 day’s to attempt to head south to Little Harbor, but the winds were higher than predicted, the waves even inside the reef were high and choppy, and the glimpse of the cut that we could see was a whipped cream froth of white waves and foam. So we turned around, and went back to Marsh Harbour for another 2 nights.

As we selected our anchor spot, and dropped the hook, we noticed many captains sitting in their cockpits watching the world go by with suspicion. We soon learned that the suspicion was warranted. The wind continued to increase, and rain started, so Mike and I hid below decks to enjoy our lunch in peace.

We tend to keep the VHF radio tuned to 16 (the hail and distress channel) or 68 (the Cruiser Net and ship-to-ship channel) as long as we hare making enough solar power to do so. Good thing too! Because our lunch was interrupted by calls of “You’re dragging anchor!” on 16, and blasts of an air horn alerting the entire anchorage to danger. Now of course Sanitas wasn’t dragging. Don’t be ridiculous! But a huge catamaran with no one aboard was no longer hooked, and was drifting unattended through the crowded field of boats. 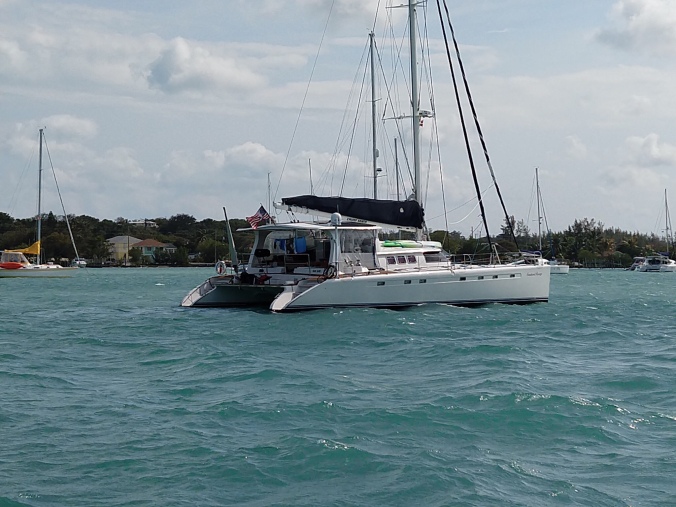 Bob from Orion hailed us directly to let us know it was drifting right at Sanitas. Bob and the skipper from Compass Rose jumped in their dinghies to see if they could board the cat. Mike and I stood by on Sanitas, ready to fend her off if she drifted too close. Luckily, her anchor caught again before she ran into anyone. But now we had a catamaran much too close to our full-keeled monohull, and to several small motor trawlers. Each of these types of boats swing differently on anchor, and need to have space to swing fully and safely as the wind changes direction.

Bob managed to reach the owner of the catamaran, Southern Passage, who was ashore on Great Abaco, and received permission to board her and power up her engine in order to move if necessary. So the excitement ended well. Bob and Mike got a tour of a gorgeous, 50 foot by 26 foot catamaran (we learned she charters for $15,000 a week!) and had beers with the captain after he arrived back at the boat and successfully moved her to a safer location and reset the anchor.

The winds died down completely at sunset, we we actually were able to put the adventure behind us and could go to sleep at night!

6 thoughts on “Excitement in the Anchorage….”