I never intended to sail to Miami. I did my research, read the cruiser’s guides, and attended the boat show seminars. I decided that the best route to the Bahamas for Mike and me in our small boat, with our level of expertise, would be a daytime crossing to Bimini from Rodriguez Key in Key Largo.

But sailing had other plans.

If I did somehow end up near Miami, I never intended to pay to stay in Dinner Key, in Coconut Grove, just south of downtown Miami. Why would I, when we could stay in No Name harbor on Key Biscayne for free instead? That option is closer to our route, has a pristine anchorage in a state park with lovely beaches, bikes to rent, a snack bar, and palm trees. It would avoid the congestion and costliness of a major metropolitan area.

But sailing had other plans.

On the day that we sailed from Marathon to Rodriguez Key, winds were 15 to 20 knots, pretty much on our bow, and seas were 3 to 5 feet, with a high periodicity. That’s what sailors call “lively” conditions. Sanitas handled it well, but we definitely bashed into the waves all day long. And we observed that our top speed was reduced by almost 25% in those windward conditions. After successfully anchoring at Rodriguez right about at sunset, thoroughly tired of being tossed around, I entered our forward cabin to find everything had been soaked with sea water. The sheets on the new mattress were wet, my clothes in the cupboard were wet, my toiletries in the closet sat in a puddle, there was water on the floor in the salon, and ever a trickle in the food cupboard. It appears that as water came over the bow again and again all day long, some of that water was getting into the boat and flowing behind the headliner, coming out wherever it could find an escape route. There may have been some tears, wailing, and gnashing of teeth. We pulled everything out of the cabin, made piles of dry, damp, sort of wet, and toxic waste. Ate a can of soup for dinner, and passed out on the couch. 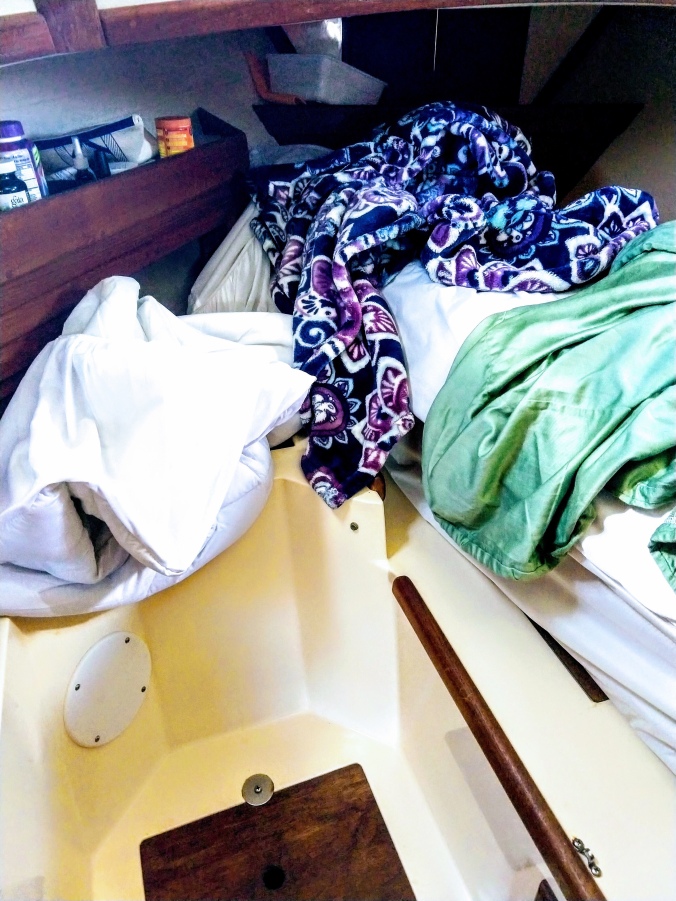 In the morning, we evaluated our options. It did not seem like a good idea to continue across the Gulf Stream to the Bahamas without addressing the “water intrusion” (aka, leak) because we would be sailing to windward often on that trip. And supplies for a repair were more readily available and less costly in the US than they would be in The Bahamas. We seriously considered returning to Marathon to sort things out. I admit, it crossed my mind that we had had a good run, and that spending the winter on anchor in Key West wasn’t the worst thing that could happen. We watched our friends on Tapati and North Star raise anchor and head for Bimini without us.

We finally decided to continue making forward progress rather than retracing our steps. By sailing a 10-hour day to Miami, we could pick up a mooring ball at Dinner Key Marina and be within walking distance to West Marine, hardware stores, and more. But we would probably need to stay there for several days, because we’d miss the current weather window for crossing the Gulf Stream. The rest of our St Petersburg friends, on Orion and SE of Disorder, would probably also cross without us. Sanitas was on her own!

One thought on “Moon Over Miami”